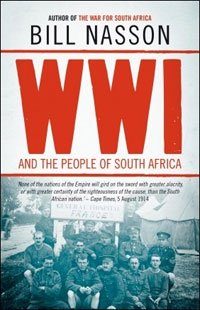 Buy WWI and the People of South Africa from kalahari.com

The book looks at South African society during the World War I and at the aftermath. Many of the country’s inhabitants did not escape the impact of the war that affected so many areas across the globe.

At the time preceding the outbreak of WWI South Africa was an important regional power for Britain, among other reasons because of the interest Germany had shown in supporting the Boer republics in the South African War of 1899 to 1902. Furthermore, the Germany navy had begun to expand its activities to the South Atlantic and Indian Ocean. For Britain, South Africa, together with the other imperial dominions, could serve as a suitable source of manpower and supplies to act as a buffer in Europe against the belligerent Central powers. On the other hand, from a German perspective, certain parts of Africa were important for her military and economic strategy, for instance, German East Africa, the possession of which could undermine British naval dominance in the Indian Ocean and Persian Gulf. German South Africa (Namibia) was also strategically important for Germany, with the potential added benefit of serving as a possible springboard into a poorly defended southern Angola and thus ensuring commercial and other benefits. From examples such as these, of contesting British and German regional interests in southern Africa, it is argued that South Africa was of strategic importance, a point analysed by Nasson.

The South African prime minister at the time, General Louis Botha, was committed to creating a “real Army” in South Africa’s post-bellum period, with the purpose of not only defending the borders but also ensuring that the trade routes were safe. The Union Defence Force (UDF) was subsequently established in 1912. While admittedly the primary aim for its initiation was to the country, it could also serve as a useful expeditionary force for Britain, but this was never a main focus. As Nasson explains, however, in view of past events which created feelings of animosity between English- and Afrikaans-speaking South Africans, creating a defence force was never going to be an easy task, because of strong political, cultural and social factors that had become accentuated after the South African War. Readers will be able to follow up on examples of this restiveness present among the country’s different elements, analysed by Nasson in chapter 1 (“South Africa and Africa in the World before war”), for instance, labour discontent, strikes, anti-pass protests and Mohandas Gandhi’s satyagraha resistance campaign. The chapter ends with a number of “what-ifs” about South Africa’s participation in the war overseas, and the resultant situation within its borders, and these give the reader ample material to think about.

One of the principal reasons for entering the war was that after the formation of the Union in 1910, Botha and Smuts had wanted to assert the country’s new identity. However, it was harder for some joining the war than for others, and in fact not everyone seemed to be welcome to do so, as is seen from the racially prejudiced attitude of Smuts towards coloured men, fearing they might end up as Christian soldiers on common terms with white British infantry – which could lead to soldiers returning home with impudent ideas. Smuts therefore “proposed that medical doctors be assigned to check the racial ancestry of any would-be Empire fighters if their appearance on departure looked dubious”. In other cases what might be termed “conscientious bribery” practices existed, as in the case of one of the country’s leading banks, which assured its younger married male employees that if they volunteered, then their children would be taken care of and they would be spared any financial loss. Chapter 2 (“Rising to War’) explains “the forcefulness of war sentiment” and an “atmosphere of being carried along in the heat of the moment” in the process of self-mobilisation. And it discusses the response to going to fight, from all corners of South Africa, including from prominent black leaders such as Dr Rubusana and Solomon Plaatje. For figures such as Dr Abdurahman and John Dube of the SANNC (later the ANC) the war was seen as an opportunity to yield potential benefits, unlike some nationalist-minded Afrikaners at the time “who were denounced for their sympathies with German South West Africa and for showing respect for the Kaiser”. Some Afrikaner and coloured fishermen were obviously ad idem with these Afrikaners, shown by the naming of their small boats – Bismark, Berlin and Kaiser. There were clearly differences of opinion from within South Africa to be in the war, or not, and the reader will see just how interesting the various perspectives are.

Chapter 3, entitled “Recoiling from War”, further examines the motives and reasons of specific groups with strong neutral and anti-war sentiments. It contains 16 pages of black-and-white photographs to illustrate aspects of the war, while chapter 6 counterpoises this with a selection of 16 colour photographs, including propaganda posters and pictures of weapons and utensils used in the war, with some rare depictions not easily accessible for the reader. On one of these pages we see Jackie the pet baboon, the mascot of the SA Scottish Regiment, in a black-and-white photograph, being put through yet another trick, although luckily we also see him in a more serious mood enjoying his luncheon, in domestic civility. Back to the text: when we read how Gandhi continued from outside South Africa urging “loyal followers not to swallow falsehoods about the war being necessary or just”, an important consideration appears for the reader. As Nasson explains, people had a choice about how they would relate to the conflict in which they found themselves – those fighting in the war were volunteers. Nasson discusses other cases, where many turned away from the war, such as “large bodies of ordinary Africans” avoiding the recruitment campaigns as in cases in Natal and Zululand. The reader will see the extent to which the issue of choice is a complicated one, and the precarious position Pretoria would find itself in, and the urgency that there would need to be to find a solution to the dilemma of domestic rebellion which, if not carefully managed, could lead to “an insurmountable political mess”. Chapter 4, “Rebelling against War: Rumbling”, and chapter 5, “Rebelling against war: Rolling”, further discuss the divisions such as “split soldiering” and the story of Jopie Fourie in the story of the 1914–1915 Afrikaner rebellion. The reader will be overwhelmed by the incredible research that has gone into these chapters and perhaps at this stage it might be appropriate to comment on the use of sources for the book, particularly when dealing with difficult issues such split allegiances. Particularly important and indeed impressive is the balance of primary and secondary texts employed as part of the research, and not just merely accessing the latter. This means that a fresh look at issues is assured for the reader from a historian who writes with integrity and accessibility.

Chapter 6, “Dealing with the German Neighbours and other Foreigners”, carefully examines the political affairs, particularly those surrounding the role in them, of the future prime minister, JBM Hertzog, and the story of German South West Africa (GSWA). Nasson discusses the perceived status of GSWA to the effect that in terms of German foreign policy of the previous century, the territory was of limited value (compared with German East Africa). During WWI the same view of the status of the territory was not, however, held by Pretoria, as it was felt that capturing it might serve as “a bridge to a broader Anglo-Afrikaner wartime unity”. But Smuts was not convinced of Germany’s intentions with its colony and as Nasson puts it, “In an absurdly alarmist depiction, an imperilled Union lay at the heart of German designs upon Africa”. In parliament Botha emphasised the need for an invasion of Germany’s colony, South West Africa. But Nasson shows how intricate the matter that could seem simple in fact was – because of the position of Germany in the Central powers with Turkey, and the relationship between the Union’s Muslims, Sufists, Muslims in the Ottoman Empire and Muslim inhabitants of British, French and Russian territories. Nothing was as harsh, however, as the treatment of German residents of cities such as Cape Town, Durban and Johannesburg, who “were sniffed out and rounded up as enemy aliens, even the many who had become naturalised and were an integral part of white communities”. The effects felt from German-South African relations were profound, from the invasion of GSWA, and this strongly influenced the treatment of German residents in South Africa and it also had a profound economic and financial result.

Sixty-four pages take up the remainder of the book. Chapter 7 is entitled “Women to the Wheel”; chapter 8 “Economic Gain and Economic Pain”, and chapter 9 “Beyond the War, Yet Still With It”. Nasson explains the extent of South Africa’s contribution: 146 000 white men, 400 white female nurses, 45 000 African labouring auxiliaries and 15 000 coloured infantry and non-combatant workers. There were mixed fortunes in the various campaigns. In GSWA the Germans surrendered with negligible cost to the South Africans. For the South Africans in the German East Africa campaign it was not the same and the technical difficulties in trying to explain the outcomes are best read up in Nasson, as they are difficult to grasp, especially with regard to Smuts’s role. The fortunes of the Cape Corps and the South African Native Labour Corps are discussed, with the tragic loss of almost 700 African labourers in February 1917 in the tragic sinking of the SS Mendi in the English Channel. The heaviest toll in the fighting came on the Western front, in the merciless Battle of Delville Wood, with 750 dead and 1 500 wounded/captured/missing, in July 1916. Nasson makes incisive links that the war and its end had in and on South Africa, some more evident than others, and some with extremely significant outcomes. The preceding chapter (8, “Economic Gain and Economic Pain”) contains 23 pages of explanations of the effect the war had on South Africa and its people. Economic disasters struck: many businesses went bust, exports shrank, the nature of the economy changed. On the other hand, great opportunities emerged, for instance, the Oppenheimer empire was formed in 1917. New political alliances were formed, politics was influenced and South Africa was affected socially. On page 181, however, according to Nasson, although South Africa got off lightly in comparison with many other countries, “its leadership continued to be plagued by its effects after the end of hostilities”. The reader is in for a feast of explanations, of all the areas that were affected by a war that was fought mostly far away. Chapter 7, “Women to the Wheel”, contextualises the role of women in the war, but also emphasises the important psychological role that women played without necessarily being directly involved. Pride of place, however, goes to those women who responded to the “sacred calling”, such as the nursing services. And what of the many women who were widowed by the war? Many of the wives and partners of those lost with the sinking of the Mendi and at Delville Wood were without the same kind of income they were used to before the war and the lives of their families were affected.

Pages 197ff provide the reader with some select sources and suggested further reading. The endnotes for chapters 1–9 are meticulous and, as mentioned, show a balance between primary and secondary sources. The index is eight pages long.

WWI did not pass South Africans by. The war affected the country in many different ways, as is expertly shown by Nasson in this gripping text. Nasson’s gift is to be able to put across sometimes heavy concepts in a way highly accessible to readers who want to know more about complex issues.