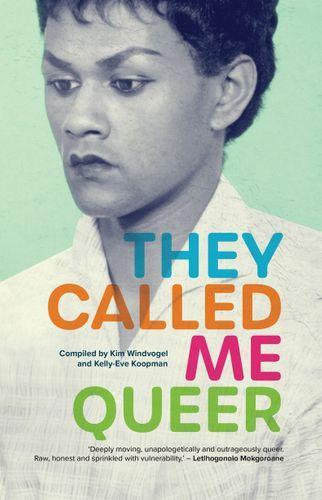 They called me queer is a collection presented in various genres, predominantly consisting of essays. It is compiled by human rights defender, poet and writer Kim Windvogel and storyteller Kelly-Eve Koopman. The term “queer”, as used in the title, has historically been used as a pejorative, but has been reclaimed by the LGBTQIA+ community to be used as a neutral or positive term to refer to sexual and/or gender minorities, like those who identify as lesbian, gay, bisexual, transgender, queer, intersex, asexual or others.

Starting with the paratext, the cover features a photograph of Piper Laurie, aka Ismail Hanif, a well-known figure from District Six in Cape Town. The picture is from the Kewpie collection, a photographic archive curated by Gay & Lesbian Memory in Action (GALA). Laurie forms part of a community of gay men of colour who oftentimes identified as female, already challenging the gender binary in South Africa between 1950 and the 1980s. This image on the cover is thus a well-suited introduction to what can be found in the book itself, since the photograph becomes a catalyst for the contents of the collection.

Our country has one of the most progressive constitutions for queer people in the world, but what is written on paper is not necessarily mirrored in society. The marginalisation of sexual and gender minorities persists in our society, especially for queer people of colour, who experience a double marginalisation. When you scrutinise pride parades and queer representation in the media locally, whiteness is predominant in the representation of queer individuals, yet this collection challenges the skewed image of the people who form part of the queer community in South Africa. The intersectional approach of They call me queer breaks down the walls that heteropatriarchy and colonialism have built around queer individuals of colour, and allows us to see into their lives and learn from their experiences. The collection presents you with the hardships, but also the more colourful and joyful experiences of the queer community.

The collection is an amalgamation of authentically South African narratives, and it challenges the perception of queer identities and presents narratives one can either identify with or learn from, regardless of whether you are queer yourself or not. Besides the essays, They call me queer includes poems, letters, conversations and short stories. Themes include identity formation, religion, acceptance, rejection, sexuality, gender, bullying, addiction, family dynamics, socio-economic issues, suicide, mental illness, sexual violence, polyamory, sex work, patriarchy and the stigma of HIV. These themes are written into narratives by a wide variety of people, including film directors, columnists, writers, poets, copywriters, performance artists, activists, singers, photographers, feminists, playwrights, sex workers and researchers. As varied as their fields of work, these people also identify with a wide variety of queer identities, including lesbian, gay, bisexual, transgender, intersex, asexual, gender non-binary and more.

In a still largely segregated and unequal South Africa, this book is a breath of fresh air to display difference and othering. This collection could be of immense value to especially young queer individuals still struggling to find their voices and still in the process of their identity formation. The narratives presented have the potential to encourage them to be brave, and can show them that they are not alone in a heteropatriarchal world. In addition, the collection could also be beneficial to cisgender and/or heterosexual individuals willing to educate themselves on the experiences of queer people of colour. They call me queer advances the normalisation of queerness and is indicative of queer people not being afraid to be seen or called queer in this day and age anymore.