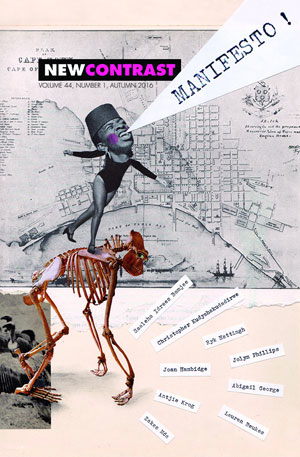 “Manifesto!” shouts the cover of the 173rd issue of South Africa’s oldest literary magazine, New Contrast. The effect is compelling: the reader is enjoined to listen and engage. Inside the cover page is an extract of a story by Nadine Gordimer published in the magazine’s first edition, in 1960. This extract introduces the theme of responsibility, which runs like a thread through many of the contributions. Meg Vandermerwe, temporary editor for 2016, begins her notes by asking, “What is the responsibility of the writer?” The question is then extended reflexively: “What is the responsibility of a literary journal?”

Vandermerwe leaves it up to an impressive cohort of acclaimed South African writers to answer the first question, and offers instead an eloquent outline of the responsibilities of the magazine: To “make New Contrast a space where one can expect to read excellent, diverse and vital writing, in a range of languages, told by a range of voices (new and established), including those from other African countries and overseas […] [T]he heart of New Contrast remains with championing emerging talent” (7). And it makes good on this promise, for in the space of the next 90 pages the reader is catapulted into a field where a wonderful encounter with a multitude of diverse literary expressions awaits.

The content is organised into two primary sections, according to form: poetry and prose. An interview with Zakes Mda prefaces the section on poetry, and a short extract from Willem Samuel’s graphic novel Mengelmoes introduces the prose section.

The author manifestos are distributed throughout and serve to bookend these sections.

The manifestos offer multiple views on the role of the poet. For Antjie Krog “the fact that you are a poet is already a critique on today’s society, because a poem is unsell-able” (14).

Sindiwe Magona warns the writer “against being seduced or co-opted into blind allegiance to her community […] For the writer’s community, the writer’s truth is often inconvenient” (57). Magona’s manifesto is repeated in Xhosa on the next page, a strategy that not only serves to illustrate the magazine’s commitment to diverse content – Magona is speaking to black authors who write in their own languages – but also reminds readers that they are part of a broad network of imagined readers and communities.

Valda Jansen writes to overcome her fears – for her, writing is a deeply personal practice that risks being obstructed by the imagined reader: “Sodra ek ’n verbeelde leser visualiseer, is daar ’n wig tussen my en die teks” (91).

Henrietta Rose-Innes admonishes the writer not to add to “the dross of the universe” (92).

Lauren Beukes’s incendiary manifesto, inside the back cover page, declaims her view that “art is the fire & the light./ It’s comforting against the/ darkness. It’s what we use/ to burn shit down.”

Framing the other contributions as they do, these manifestos function to punctuate and offset the reader’s experience of the poetry and prose.

The poetry section contains original work by 18 poets. Among the contributions by established poets, the figure of the poet and the act of making a poem are prominent themes.

In Joan Hambidge’s Afrikaans ode to David Bowie, the genius and isolation of the artist is evoked through a series of allusions to Bowie’s music.

Karin Schimke’s “How the architect lives” renders the architect as a magician who can conjure entire cities in open space, thus foregrounding an alchemical relation between ideas and forms that offers many parallels with the work (role?) of the poet.

The two poems by Athol E Williams read like parables exploring the tragedy and potential of human society as a collective. His use of these forms calls to mind the role of the poet as a teller of stories and maker of myths.

Among the emerging poets, Tariro Ndoro’s “Cross the border at night” and Lise Day’s “Refugee” are devastating evocations of the plight of the refugee, and their themes are offset by their placement on opposite pages, putting the two poems in conversation with each other.

Ndoro’s use of second-person address draws the reader into the position of the refugee attempting to cross the border from Zimbabwe to South Africa, and reflects the manner in which refugees are dehumanised and forgotten by history: “If they do not fall to the crocodiles,/ They will be shot by farmers who think that they are monkeys/ No one will hear their obituaries” (24).

Day’s poem takes the death of the Syrian toddler Alan Kurdi as its subject – here, the fate of the drowned child demands global recognition, as “the sea releases him/ to lie quietly on a pebbled shore/ and shout for all the world to see” (25). Through these poems, the poets respond to a mounting, global humanitarian crisis by pulling into sharp focus the particular, individual experience of the refugee, which simultaneously comes to represent the experience of all refugees. Chillingly, the reader, safe in her home, is reminded: This could be you; this could be your child.

“Distrik Sewe” by Vincent van der Zee offers a striking complement to the theme of refuge, as the speaker wryly traces his lineage through a series of rhyming stanzas to illustrate how he and his ancestors are inevitably locked into a cycle of perpetual displacement: “Met stikkieswerk bou ons ’n beter lewe,/ doer en gone in Distrik Sewe.// Môreoggend sleep hille ons na Distrik Ag” (27).

This theme of displacement is also picked up in the two nature poems by Christine Coates, which subtly surface questions of land and heritage rights through a focus on the animal kingdom.

The deeply personal poems by Jolyn Phillips, whose collection of short stories in English has just been published, showcase her unique and lyrical use of a distinctive Afrikaans voice. In “ballade van wasdag” she skilfully maps on to the repetitive rhythms of washing day a mother’s bitter grief for her son, as observed through the eyes of the speaker: “hy/ die naam van rede in Ma se hart// ek die sukkelende self/ die nie-klipportret gee my/ die verdoeselde geheim in sy oë” (32).

If Phillips is a good example of the poet speaking “in her own voice”, then Kerry Hammerton’s “Penelope”, a witty revision of Homer’s “Odyssey” presumably inspired by Margaret Atwood’s The Penelopiad, illustrates how the mimetic voice can be used to subvert the themes of the male-dominated, heteronormative Western canon.

The prose section contains three contributions. In Ryk Hattingh’s “Val”, a struggling writer is inspired by a chance encounter with an old man. As their brief acquaintance develops, the story raises questions about social responsibility and the ethics of writing.

Hilda Wilson’s “Tonsillitis” traces the journey that the eight-year-old protagonist makes to the doctor’s office with her father in 1970s South Africa. Through the child’s point of view, apartheid’s toxic blend of race, space and class politics is vividly evoked in prose that recalls the short stories of Alex la Guma and Richard Rive.

Christopher Kudyahakudadirwe’s “Voices of the ancestors” draws the reader into its claustrophobic atmosphere through the effective use of second-person narration. The young protagonist and her baby are stranded in the village of her mother-in-law after the death of her husband, to whom she was given in an arranged marriage by her paternal uncles. The story interrogates the cost of traditional ways of life to young black women in rural, patriarchal African societies, and raises questions that resonate with the conditions of the refugee introduced in the poetry section.

By the time the reader has turned the last page, it is clear that the writers and the journal have held their part of the bargain outlined in Vandermerwe’s introduction. A third axis of responsibility now emerges: the responsibility of the reader. As Vandermerwe notes, “As lovers of free speech and good writing […], is it not our responsibility to support literary endeavours, which seek to foster them?” (8).