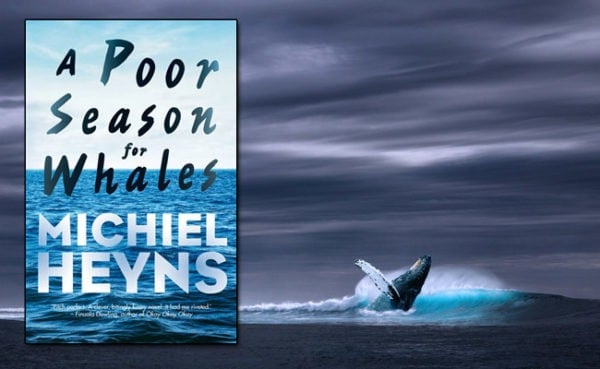 A poor season for whales, Michiel Heyns’s ninth novel, is surprisingly tricky to review, as commenting on nearly any details of the plot involves spoilers both great and small. The preamble, a spin on the opening paragraph of Jane Austen’s Emma, sets up the dynamic with a most intriguing teaser:

Margaret Crowley, handsome, clever and rich, with a comfortable home and a happy disposition, seemed to unite some of the best blessings of existence; and had lived nearly fifty-six years in the world with very little to distress or vex her. It was therefore hardly to be foreseen that in her fifty-sixth year she would kill a man with a kitchen knife.

So, now the reader knows what will happen, and is thus immediately seized with the question of how this denouement will be reached – and within a few chapters, is already speculating as to who the victim will be. But what is so marvellously clever, almost arch, is the stabilising, yet comic, use of Emma as a framing device. Heyns’s ability to capture everyday social interactions with almost uncomfortably precise focus, and to blend moral philosophy into dialogue, is indeed reminiscent of Austen, a feature further underlined when he has his heroine struggle between sense and sensibility even as she reads Austen’s novel of that title.

The surprise of the last line of the preamble, especially coming after the familiar elegance of Austen’s words, means that the reader might miss the word that Austen also used to signpost the energy that drove her story: “seemed”. Because all is not as it seems; like Emma, Margaret is bored, purposeless, at the same time occupied with desultory work and a network of troublesome family members and friends. Just like Emma, Margaret is trouble waiting to happen.

We soon learn that Margaret has indeed known distressing and vexing events: her husband of nearly three decades has left her – for another man. Even worse, there’s an awkward agreement to keep the divorce amicable when it’s clear that Margaret would like to throw a few things. She retreats to Hermanus with the family dog, Benjy (not only possibly the nicest character in the book, but integral to the plot). Here she builds a pristine new house in a prime spot overlooking the sea, and attempts to hit the reset button on her life.

But her peace is soon interrupted by an almost Chaucerian flow of characters intruding into her new environment and routine. A tart-tongued Jewish matriarch and a long-lost, libidinous Australian sister-in-law show up, as do her adult children, each presenting her with different sticky webs of guilt, affection and anxiety. Then, Rebecca, Margaret’s imperious former housekeeper, moves herself in. She bullies Margaret shamelessly, and some of the novel’s most pointed social comedy comes from Margaret’s meek submission to Rebecca’s demands, in a dance of “political correctness meeting black entitlement meeting white guilt … [p]lus white privilege”.

These are the words of Jimmy, who is the most disruptive of all – a beautiful and rather mysterious young man who wouldn’t know a boundary if it got up and bit him. The mixed-race son of a struggle icon and a radical Afrikaner, both of whom hastened to the corruption trough, he has been brought up with every benefit except for a moral compass. He fastens onto Margaret after a cliff-side rescue, and proceeds to insert himself into her life, mystifying, infuriating and intriguing her by turns.

As is characteristic of many of Heyns’s novels, drama comes when the hero – or heroine, in this case – is presented with facts or truths that are at odds with their own often idealistic or gullible views. In her efforts to understand Jimmy’s motives, Margaret is confronted with several rude truths, not only about Jimmy and his past, but about herself.

Polished as it is, the novel is not flawless; I am still narrowing my eyes somewhat at Heyns’s portrayal of how a middle-aged woman inhabits her body and explores her sexuality. This is especially true in an era when what once might have been seen or excused as seduction is now recognised as harassment. If any of the women I know had been involved in the dinner party scenario described, it would have culminated in a slap (and not the tickle kind). And, although Heyns writes about sex both exquisitely and honestly, there is no sense of the sexual accommodations or awareness that a woman with a menopausal or postmenopausal body has to develop. Perhaps a stronger editorial hand might have steered the author away from these few false notes.

At times, as frothy and salty as the sea is so beautifully portrayed – and it takes a writer of Heyns’s assurance and skill to paint so deftly the moods of the Cape ocean in summer – this is one of his lighter novels. While not as uproariously funny as The reluctant passenger, it is certainly amusing: there’s a slapstick Christmas dinner scene (it almost includes a banana peel) that will remind everyone of their annual post-holiday vow to spend future “festering seasons” in a Buddhist monastery. And the skewering of the white, wealthy, bland and entitled summer population of Hermanus is deliciously wince-making.

While I’m biased in favour of any contemporary novel that references Austen, there is no doubt that this is an enjoyable read that wears its intelligence lightly. Heyns’s writing is, as always, effortlessly graceful, and here he folds the bite of social satire and the ballast of moral observation into a tempting soufflé. And yes, poor season or not, a whale does make an appearance – and a memorable one, at that.