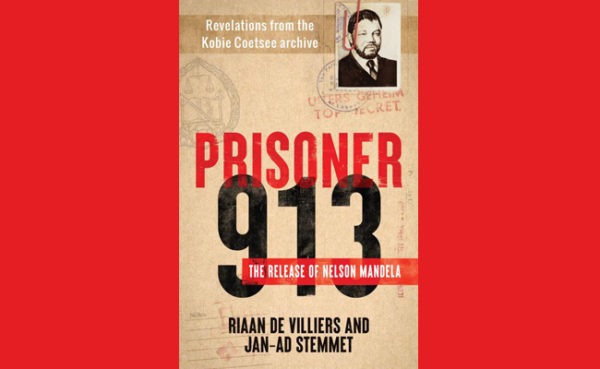 0.730 Brigadier Keulder visits 913 and concludes documentation related to his release. … A month’s medical supplies are also handed to him. (913 emotional) Note: 913 walks around the house in his pyjamas the whole morning and asks every now and then whether there is any news of Winnie.

Translated from its Afrikaans original, this extract from a 9 February 1990 document stamped “Secret” appears close to the end of this unusual book on South Africa’s recent political history.

A detailed and intricately plotted reconstruction of the actions surrounding the eventual release of Nelson Mandela from prison, Riaan de Villiers and Jan-Ad Stemmet’s Prisoner 913 has some of the attributes of a good political or contemporary historical thriller – atmosphere, suspense, intrigue, surprise and double-dealing. The only elements missing are sex and death. And even there, there’s a racy moment. On the day of Mandela’s release from Victor Verster Prison, the Security Branch warned its commanding officer to be vigilant, as there’d been a report from London of a rumoured Prisons Service plot to shoot Prisoner 913 as he walked out to freedom.

In a sense, the real promise of this book is that it reminds you of one of Tolstoy’s most memorable remarks, in which he groaned that “historians are like deaf people who go on answering questions that no one has asked them”. These authors provide an answer to what may by now, be an increasingly exasperated shrug: do we really need yet another book on Nelson Mandela? Did the average reader’s stomach not reach its limit back in 2008 with Anna Trapido’s Hunger for freedom: The story of food in the life of Nelson Mandela? Now you can prepare to be surprised. As Prisoner 913 demonstrates, if there’s a fairly new angle on its subject, fresh evidence and a forensic eye, there’s room for another Nelson Mandela portrait. What this new volume does is train a telescope on Mandela’s final decade in prison, but to observe what was going on through the wrong end – to make things out, you need to squint hard to try to see what’s fuzzy or only partly visible in the distance.

As this book’s cover proclaims, the telescope is “Revelations from the Kobie Coetsee archive”, a fat file of over 13 000 pages assembled from mostly secret records about Mandela kept by the apartheid government’s last minister of justice and prisons. Coetsee not only routinely oversaw Mandela’s last eight years of incarceration and his release, but, as a self-appointed “gatekeeper” of the state’s “star prisoner”, from 1985 onwards he went well beyond the bounds of standard custodial duty to assume “a special interest” in 913 (Mandela’s overall prisoner number for the entire period of his internment).

News of secret talks between Kobie Coetsee and Nelson Mandela may not be much of a revelation. That lies in what emerges from the sprawling collection of matter-of-fact detail unearthed from a vast and varied personal ministerial archive. Among much else, it shows how the minister of justice and prisons exploited his position to influence the complicated political theatrics around the twilight years of Mandela’s incarceration and his release. If the ground for Prisoner 913’s freedom was well cultivated, then Coetsee was surely the head gardener. As Riaan de Villiers explains in an informative introduction, his chosen fertiliser was an obsessively nosy “intelligence operation” which was “aimed at monitoring everything Mandela and some other prisoners said or did, and utilising this knowledge to inform his own agenda as well as government strategy”.

As is to be expected, the fateful process around the freeing of Nelson Mandela is what gives these pages their dramatic impetus. In propelling the story, Prisoner  913 provides a wealth of fascinating information on the intricate dealings and edgy bargaining among a large cast of circling ANC and government characters.

Full of twists, turns and surprises, the book’s core of over two dozen episodes throws new light on the circumstances which eased bargaining and negotiations, while also limiting the fulfilment of grander visions or possibilities. Through all of it, Coetsee, a reformist PW Botha cabinet minister who once brought Mandela a case of good Cape wine as a gift (sadly, we’re not told whether it was red or white), was not one to drag his feet. Back in 1984, he had proposed to the stiff-necked State Security Council that Mandela and “numerous” other political prisoners be released unconditionally.

There is a fair amount of other clandestine business to be savoured. It's uncovering, and the unsensational manner in which it is aired, is a tribute to the tenacity and meticulousness with which the authors have sifted through Coetsee’s mountain of evidence, which was squirrelled away until it was placed under the nose of Jan-Ad Stemmet by a University of the Free State archivist in 2013, 13 years after the former cabinet minister’s death. The book’s findings take the publicly known story of the shadowy interactions between Prisoner 913 and the National Party government much further than is commonly assumed, revealing hitherto unknown twists and turns.

These include both the obvious, such as the “last minute horse-trading” sessions of these years, and the less obvious or even startling. In a transcript of a pragmatic and blunt conversation between Coetsee and Mandela, 913 notes that the government’s promised release of a batch of long-term prisoners applies to

men who are “a South Sotho – all the others are Xhosas”. Pressing for the addition of a further two Zulu inmates as “a special case”, he points out that “the absence of people representing this group is a serious weakness. … Releasing them would also bolster his relationship with Chief Mangosuthu Buthelezi”. There’s nothing quite like a glimpse of nationalisms when stripped of their mythologising humbug.

The archival findings presented here put more flesh on the established general portrait of political actors, both domestic and international, incessantly on the move in a chaotic political game of musical chairs, in which it took years rather than minutes for the music to stop. With some figures cautiously optimistic, some apprehensive and some resigned to whatever was coming, virtually everyone was in some way locked into someone else’s orbit.

Among the more intriguing “backstories” are glimpses of Mandela’s assertiveness in dictating his preference over the exact timing of his release. The ground which had to be cleared in advance was not only politically delicate but also painfully personal. Some of the more domestic exchanges presented here are both comic and tragic. In a monitored conversation with visiting family members in September 1989, Mandela says that although Winnie Mandela is “bankrupt”, she continues to live extravagantly. “The ambassadors,” he confirms, “have been warned not to give her any more money.”

In a later instalment of that grubby saga, we learn from a confidential British diplomatic minute at the beginning of February 1990 that Mandela wanted his release held back, “as he still has problems to resolve with the ANC as well as personal problems” (presumably Mrs Mandela!)”. The reporting official, Charles Powell, private secretary to Prime Minister Margaret Thatcher, seemed to be making sure that his boss was kept abreast of Mandela family gossip.

Elsewhere, there are tantalising whiffs of the might-have-been moments of the early 1990s transition, arriving too late for a history that had already been made. Almost up to the day of FW de Klerk’s dramatic announcement at the beginning of February 1990, an astonishing notion “was still alive”. It was of Nelson Mandela “serving as a personal adviser to FW de Klerk (in tandem with other ‘elder statesmen’) – and continuing to serve as ‘facilitator’ between the NP government and the ANC’. There was something almost touchingly wishful about that, like reciting a prayer in a church full of nonbelievers.

A staple ingredient of Prisoner 913 is its close examination of documentary evidence; one of its minor yet noteworthy aspects is its commentary on the incomplete nature of the Kobie Coetsee archive. In their reading of this material, De Villiers and Stemmet are to be commended for reinforcing the virtues of good, old-fashioned history – sticking to firm evidence, acknowledging gaps and using informed speculation rather than guesswork in reconstructing some of the most elusive parts of this story.

The authors have also turned to already published accounts to add substance to their narrative. As readers will discover, Nelson Mandela’s 1994 Long walk to freedom and FW de Klerk’s 1998 The last trek don’t just supplement the findings of Prisoner 913; at times, they contradict the Coetsee record. These uncertainties add spice to the narrative.

A less spicy feature of this book is its overall style, with a wealth of often microscopic detail, including long extracts from documents, packed into over 30 short sections. Requiring sustained interest and careful concentration, Prisoner 913 will probably test the patience of a more casual reader. But this isn’t to detract from what is ultimately an engaging human story at the very centre of South Africa’s contemporary political history of transition.