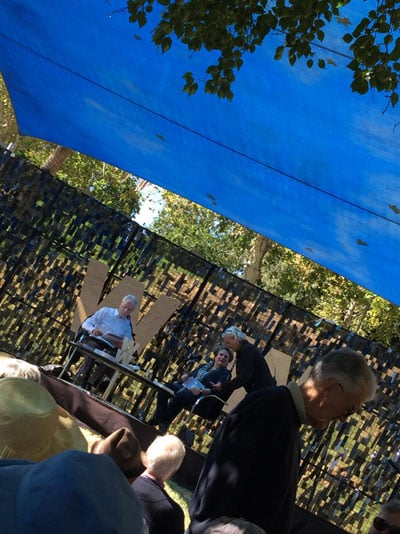 There’s a morning ritual I’ve cultivated over time at the Adelaide Festival. It is to sit quietly over a coffee at a small café on the banks of the River Torrens. There’s a soothing element to its quiet beauty, and just the occasional jogger and darting bird to catch the eye. A short stroll away is the Writers’ Week venue, a verdant oasis in the middle of the city. In its unassuming way, that moment sets the tone for another day of inspiring ideas. It nourishes the soul, a lot like the festival itself: quiet, unhurried, relaxed.

It was on just such a morning this March, with the sun shining and festivalgoers gathering in small numbers around me, that I felt a particular rise of anticipation. Its impetus came from two sources, both related to celebrated South African writers. Let me just come out and say it: I rate Agaat as the finest novel I’ve ever read, and I’ve read a few. As I had remarked to Writers’ Week director Jo Dyer at the opening night party, among many stellar guests the writer I was most excited about meeting was Marlene van Niekerk.

Also, it’s a rare triumph that a festival of this size has a Nobel Laureate in Literature gracing its stages. JM Coetzee has been a local resident for the best part of two decades. He is a professor of literature at the University of Adelaide and patron of the JM Coetzee Centre for Creative Practice. But – and this is a significant but – he has surrounded himself with a ring of steel when it comes to requests for comment or public speaking. Even on the day the 2003 Nobel Prize for Literature was announced – a compelling reason for exuberant celebration, surely, even for the most sanguine of characters – there was no impromptu interview, no revelation of inner thoughts. I was working in the SBS newsroom in Sydney on the day and sought to contact him for comment. Alas – and I should say, predictably – there was none to be had. A quick online search shows that he did, in fact, make a statement in that year to the Swedish newspaper Dagens Nyheter, but only to reinforce this sensibility:

That has always seemed to me one of the stranger aspects of literary fame – you prove your competence as a writer and an inventor of stories, and then people clamour for you to make speeches and tell them what you think about the world.

It is a fierce defence of the written word, of controlling how to share the art of writing.

So, on that March morning, even though I had my own session to host at the festival, my mind was primarily on the heady prospect of Coetzee in conversation with Van Niekerk. Would he possibly be lured out of his “radio silence” to comment on aspects – any aspects – of literary practice, personal experience, the world at large? I knew in my heart it was wishful thinking, but still, if anyone had the stature to tease a little morsel out of him, then it had to be someone like Van Niekerk.

It was not to be.

Or was it? His opening salvo, subtle and elegant, swirled around what it meant to be someone in her position – white, Afrikaner, female, privileged, lesbian – writing in the context of Africa. He didn’t use these labels, but they were present in the question. What were the challenges of writing in Afrikaans with a view to having the work reimagined in English translation? He referenced her poem Oggend van ’n waterfiskaal, translated (by her own hand) as Morning of the southern boubou. She reveals playfully that she was in love at the time of writing the lines, and that this showed in their frivolous aspects. Later, in response to a request from the audience, she reads it in its original form. The words dance in the air as she gives full rein to the imagery and sound effects: the trilling “r” and the long, shapely vowels. It’s a magical use of rhythm and phrasing to evoke a moment in nature.

I sat there thinking the session was off to a brilliant start. Coetzee was asking searching questions, as any interviewer would do, but he was also teasing out ideas about the nuances and imperatives of being a writer who chose to remain in Africa. Woven into it was a thread of self-awareness and gravitas. For, if there are compromises to be made in staying, then surely there are larger questions of literary and moral compromise to be considered for those who choose to leave. In a sense, the question places Van Niekerk and Coetzee at opposite ends of a moving seesaw. However, she chooses to address the question: there’s bound to be an element of judgment on the African writers who write from elsewhere. It is, perhaps, superfluous to add that Coetzee, with his visceral connection to land and landscape, is foremost among these. Is it even possible to include Africa as a presence in literary writing without the writer having the solid feel of the ground beneath his feet? It’s an intriguing and fundamental question.

It was, not surprisingly, familiar ground for Van Niekerk. She spoke of the changing landscape of public debate in South Africa, the way some voices are being shut down, of being referred to as a colonial professor. But, most powerfully, she gave the impression that she owned her legacy, the history of privilege and entitlement that her whiteness held. I was energised by her articulate thoughtfulness. The session, I felt, had fire. But no anger.

Coetzee received her response with his familiar inscrutability. I searched his face for signs of reaction. A roll of the eyes, perhaps, or some kind of revealed body language to indicate his support or disdain. There was nothing. He simply let her speak.

He pursued the idea about the nature of translation. Once again, an interesting line of discussion coming from a prominent writer with an Afrikaans name but working in English, to one who clearly identifies with her cultural roots in Afrikaans but who reaches her global readership through translation.

She reveals her frustrations with the process, focusing primarily on Agaat, that most wonderful of novels, which was translated by Michiel Heyns. It’s best, she says, for the writer to put aside her ego when having her work translated. And, she adds with a spark of humour, it’s always wise to keep the translator onside.

She says translation has a way of taking from the book some layers of meaning, but also the potential for it to gain others. As an example, she cites a TS Eliot sensibility that Heyns brings to the English incarnation of Agaat. I have to admit this reference is a little beyond my simple and superficial recollection, but I make a mental note to have another look at the text for clues.

Van Niekerk speaks about the frustrations of having her work unavoidably changed for an international audience. In perhaps the most passionate moment of the session, she notes with pointed disapproval that the title Agaat in the English translation becomes The way of the women. She declares that she has no connection with this title. In fact, she considers it “twee”. Later, when the session is opened up to questions from the floor, someone asks her why, given these frustrations, she didn’t just translate the work herself. Her answer is illuminating. She says she would rate her grasp of the length and breadth of English at about 60 percent. For Afrikaans, it’s 80–85 percent. This difference, from a literary perspective, she says, is significant. It’s not a case of affected modesty. It is, rather more pointedly, drawing a line between the able, the adequate, the passable – and the magnificently soaring. It is the difference between language that walks at a steady pace and language that rises and falls in elegant arabesques. Her reading of the poem, emphasising the trilling onomatopoeia and wonderfully evocative nature of Afrikaans, draws warm applause from this Australian audience, even though only a few of us understand the words.

Still on the question of language, Coetzee asks for her reaction to pressure from Stellenbosch students for the university to exclude Afrikaans as a medium of instruction. I don’t think there’s any doubt that Coetzee is phrasing his question with great care to position himself against any such move. Van Niekerk tells us that, as a poet, she is saddened by this development. She says it is shutting down another channel for Afrikaans, and that’s bad news for those writing and reading in the language.

When Coetzee again opens the session to input from the floor, a middle-aged gentleman steps forward and asks her whether she thinks whites have no future in South Africa. She refuses to be drawn, and answers in diplomatic terms. He has a second go, trying to get her to reflect the whites-as-victims tenor of his question. She clearly has no interest in entertaining this line of thought.

Significantly, Coetzee himself does not intervene. He reveals no desire to be part of the discussion initiated from the audience. This is, of course, perfectly conventional for moderators (I moderated three sessions at this year’s festival, and wouldn’t dream of inserting my own views in responding to a question that is about the writer). But this is a most unusual moderator, a global literary superstar who almost never shares his thoughts in public.

I feel myself tempted to rush up to the questioners’ microphone and ask: “Marlene, is there any aspect of today’s discussion that you would like to put to JM?” in the wild hope that he would not refuse her. But I don’t.

This literary festival, perhaps the most relaxed of the scores that take place in Australia every year, sprawls across a park in the city centre. It’s hard to resist its charm. And, this year, it’s pleasing to note that, over and above the Coetzee-Van Niekerk hour, there is a strong African presence. The honour of delivering the opening address goes to Man Booker-winner Ben Okri. In one of my sessions, there is warm enthusiasm for Ndaba Mandela as we discuss his affecting Madiba memoir, Going to the mountain. Sisonke Msimang, one of the most articulate of the emerging generation of African writers, gets a strong reaction to her memoir, Always another country. And South African-born writer Ceridwen Dovey gives us a personalised analysis (often through the prism of her mother’s academic work on the subject) in her small book, On JM Coetzee.

Yes, Coetzee’s presence looms large in this city and at this festival, but it is largely in absentia. I’ll share one final anecdote illustrating the nature, for me, of his stature. It was at a previous Adelaide Festival that I was making the short walk from the festival venue to the state Art Gallery, when coming towards me on the road was the man himself. I felt an improbable upsurge of nervousness. Faced with such a rare opportunity, should I try to exchange a few words with him? But what would I say? Should I tell him that Waiting for the barbarians was truly a book I couldn’t put down? Should I reveal to him the revulsion I felt reading Disgrace? Should I just thank him for the polished Virgilian gem that is Age of iron? That I didn’t quite get Elizabeth Costello? In the end, I think I barely nodded an acknowledgment as we crossed paths and the moment was over. Perhaps it was for the best.

Anton Enus was a radio and TV journalist at the SABC in Johannesburg for 15 years in the 1980s and ’90s. For the past 20 years, he’s been based in Sydney as a news presenter for SBS Television.