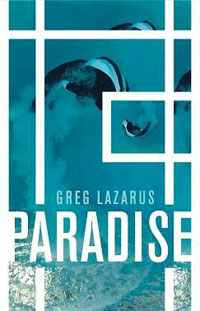 Paradise, the third book by “Greg Lazarus”, the husband-and-wife team of Greg Fried and Lisa Lazarus, is a comedy of characters whose lives and goals by chance and design collide in Cape Town, a city that more than others suffers its touristic image in its literature. The novel’s plotlines are lightly drawn: a man in midlife faces a crisis of self-esteem at home and at work; a young woman discovers her true parentage; an Amsterdam waitress is tasked with stealing an artwork that stands in a locked room in a building on Long Street.

The story begins and gathers around Hershel, an overweight, underperforming letting agent who is coming to terms with a divorce. Converging on his life are Surita, an earnest judo athlete and animal rights activist who discovers in herself a lesbian streak, and Maja, a waitress turned thief and seductress; while the hedonistic Englishman Francis and the wise man Avram Tversky, who quotes from the philosophers, add dashes of colour to the interactions among the three main characters.

References to art history provide a narrative subtext, particularly for Maja’s transformation into a Dutch wolverine out of Brueghel’s Hunters in the Snow (at one point she reflects, “It was a Hieronymus Bosch world”). This art-historical thread might have been more carefully developed for its other thematic resonances and its relation to the back story of the coveted artwork, which is conveyed through a series of letters by one Menno at the Cape in 1793 to a friend in Leiden. These letters in their amusing quaintness call to mind David Mitchell’s pastiche of dated manuscripts in Cloud Atlas as well as Andrew Brown’s more serious intertwining in Coldsleep Lullaby of Dutch colonial history at the Cape with present-day crimes in Stellenbosch. In Paradise the resonance struck between the plight of slaves in the Cape Colony and animals subjected to modern industrial farming doesn’t quite work, partly because the connections are too removed from each other and partly because any sober note struck on these topics is lost against the novel’s broader humour.

At moments certain plot markers seem too overt (“What she wanted was entrée to that locked room”), but in a novel where history and plot are secondary to the humour of characters brushing up against one another in anger and desire, it would be a mistake to take issue with such details. The characters are genially, if thinly, drawn. Hershel, for instance, is portrayed as a flabby and feckless man in dire straits, yet he doesn’t seem to feel any of the despair, heartache or regret one might expect of a man who has lost his marriage and is on the brink of losing his job. Another example: Maja’s aptitude as Kaat de Groot, professional hunter of artworks and exploiter of men, leads one to wonder how at the start of the novel she could be languishing in a dead-end job as a waitress – why had she not earlier recognised her talent for seduction and connivance? And if she manages so easily to exploit the amiable Francis, why does she not do the same with Hershel, or Whisper the nightwatchman, to gain access to the coveted artwork sooner? Of course these questions are not in the spirit of the book, which, as if in retreat from such real-mindedness, light-heartedly devolves into a caper.

The authors are versatile in their handling of linguistic register – legalese, the language of a sports report, 18th-century missives, a newspaper feature. The narrative is scattered with unitalicised colloquialisms (“digs”, “boep”, “psyching”, “the same old”), which convey a frankness about locality that also comes through in social and geographical references (one scene involves characters jogging from the Sports Institute along the Liesbeek Canal towards the Fountain Centre). How a Capetonian reader responds to these intimacies depends on how she feels about the city’s very real simultaneous parochialism (familiar to anyone who lives here) and promiscuity to foreigners and their priorities – film-makers, tourists, international crime syndicates, crime fictions. What the novel’s title signifies is withheld till the closing lines, and even then one wonders whether Cape Town is its true signified – a sanctuary or a playground? – and whether the book is asking to be read with any seriousness or just a smile.

Also read a reader's review of Paradise on LitNet.