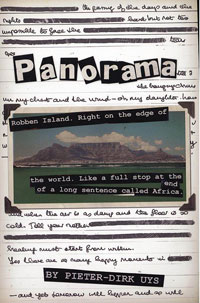 Somehow, in spite of apartheid censorship, Pieter-Dirk Uys managed to keep up a satirical commentary on the state of the nation during the 1970s and ‘80s. His shows were seen by South Africans of all backgrounds in and outside the country. An accomplished actor, perhaps better known as his alter ego Evita Bezuidenhout, he has won a number of awards, including the Truth and Reconciliation Award in 2001. Panorama is the novelisation of the 1987 play of the same name which premiered at the Grahamstown Festival.

The blurb on the back of the book suggests that the story is about Sibi Makhale, who is allowed to visit her dying father in the prison on Robben Island in 1987 and who returns to the island more than twenty years later with her two sons to find closure. In my opinion, the main story line is that of the two school teachers, Karen and Rosa, who live on the island. The book explores their relationships with each other, with the other people who work on the island and with the people they have left behind on the mainland. Sibi’s story serves as a catalyst for this exploration and is the thread which links the people on the opposite sides of the prison wall as well as the country pre- and post-1994.

Panorama refers to both a song sung by schoolchildren and to the view of the mountain from Robben Island which is visible to all who live there except the prisoners behind walls so high that not even the visiting Sunday School picnic children from the Dutch Reformed Church were aware of them.

On her first visit Sibi has to stay overnight on the island, and the only accommodation is in the teachers’ house. Her visit exposes the fear, prejudice and ignorance which have imprisoned not only the people who work on the island, but whites in general.

Karin has been trapped by her seasickness, “surrounded by police and warders and wire fences and searchlights and dogs … and more fear than I have ever known”.

Uys is a master at holding the folly and vice of apartheid up to scorn and ridicule, in a few innocent lines. In one scene, Karin runs when she sees a picture of a banned person, terrified that she may be arrested.

“I’m a teacher, a teacher, not a politician,” she wails. “All this has nothing to do with me. I’m a Christian. Politics is a dirty thing.”

Later, Rosa and her friend watch the news on SABC television after being caught up in a protest march in the city centre and realise that people were killed: “Oh, my God, Sheryl. While they were dying, we were laughing.”

In his shows Uys is able to mimic South African characters with a tilt of his head, an arch of his brow or a pout of his lips and effortlessly paint scenes which are easy to imagine. Perhaps because the novel started life as a play, the characters come across as caricatures, and run the risk of being stereotypical – for example, the big, brassy, loud Texan tourists on the boat, the warden Grobbelaar, who sounds like an Aryan god, and Sibi’s two born-free sons who are so wrapped up in technology that they may as well be from another planet.

The insertion of short paragraphs, like “Details: white man and black girl, against the law to love …”, distracted from the flow of the story, and I felt as if I was reading a screenplay. Other details could have done with a tighter edit, like the fact that the purple march happened in 1989 not in 1987. Sibi comes across as a modern black woman, married to a doctor with a white-sounding name and the mother of two young educated sons whom she has “encouraged to ask questions”. I wondered about her son’s having to explain to her what Google was as if he was “explaining that the world was round”.

Uys weaves in the history of the island first as a leper colony and prison, and voices his concerns about the mismanagement of the World Heritage site it is today. A chance meeting that Sibi has with a jogger causes her to wonder about the soccer stadium which now looms larger than Robben Island and had elicited more of a protest about its location than what was happening on the island during apartheid.

There’s a lot happening in this short novel. The small stories of the lives of the ordinary people who lived under apartheid are simply told, but with layers of nuances which could have been developed further. I couldn’t help thinking that Panorama still wants to be a play.