I’ve been writing a poem about Ulrike Meinhof on and off for four years. I’m not sure whether it’s one poem or several. Nor do I know when it will be done, or why I’m writing it. I feel like a warily loyal dog on the end of the terrorist’s very long leash. She’s way back there in the seventies losing her mind and here, in the twenty-first century’s teen years, I keep looking back at her and then forwards again, wishing we could get wherever the hell it is we’re going on our little walk together.

Does this matter at all? Does anything I write matter?

My second collection of poetry will be published soon, and while I was editing I kept wondering: Why poetry? When an age-old conundrum presents itself as suddenly relevant, your mind worries at it as though you are the very first person to have pondered it.

When, on a morning in April 2015, I read the news of xenophobic attacks in Durban, I felt struck dumb. Words would not form. Other things happened that year, too, and kept happening the next, and continue to happen now. Nothing I might say seemed useful, either to myself as a way of making meaning of the head of pus that was forming on the world’s malevolence, or for the world itself.

There was too much clamour and shrieking. I wanted everyone to shutupshutupshutup. Every word had become a desiccated fynbos shrub in a howling southeaster in Cape Town in January. It was – still is – all fire and fire and more fire. There are days when it feels spectacularly apocalyptic.

So, I nurtured my own silence and reared it into a fine piece of creative paralysis. 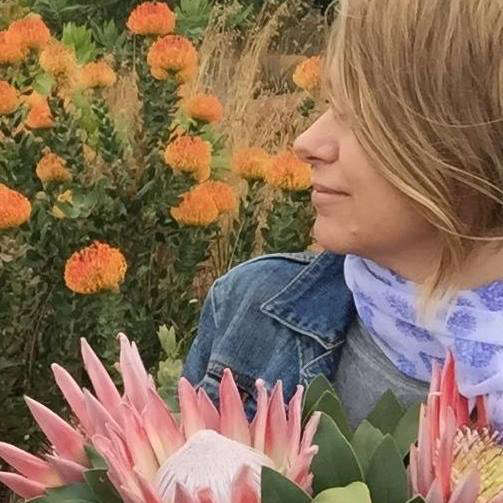 Michael Longley, in an interview says about his years of not writing, “I do believe that, if you don’t have anything to say, say nothing. And that silence is part of the enterprise, and silence is sacred too.”

Of course I wrote, writing sometimes being nothing grander than a by-product of living nose-to-nose with the ugly world – a biological process, not unlike running and producing sweat. But, things came out strangled and bloodless. I could not address the world’s horrors directly in poetry, because I believe we write better poems when we enter a subject round the back, telling the truth slant, as Emily Dickinson would have us do, and I was too rigid with paralysis to find the back entry. Anyway, enough people were crashing through the front door of our news screens and wagging their fingers at readers and listeners for me to feel anything but weariness at the assault.

In January this year, when the freelancer’s diary was mostly blank, I returned to the manuscript Modjaji had accepted for publication some time earlier, and worked with the lumpy, ungainly thing, wondering what it was I was trying to say.

Why did I have to say something? Who am I to speak? I had been making, I thought, a concerted effort to “let silence be a part of the enterprise”, and yet here I was, making noise.

I returned to Ulrike, too. Day after day, I wrote verses in the morning, notes in the afternoon. I watched, almost on a loop, the interview she did at the end of 1969, in which she says, in a rare moment of revealing the personal, that life is: “Schwer. Schwer. Unheimlich schwer” (“Hard. Hard. Tremendously hard”).

Very few people I know have sympathy for Ulrike Meinhof, a journalist and public intellectual who became increasingly radical and who co-founded the Red Army Faction, initially known as the Baader-Meinhof Gruppe. The RAF was believed to be responsible for up to 34 deaths. Yet, I “feel” her, because I imagine her thumbing that little on-off switch between hating evil and doing evil when evil finally undoes you.

I recently read Tony Hoagland’s poem “Crazy motherfucker weather”, in which he wonders “whether a third choice exists / between resignation and / going around the bend”. Ulrike went round the bend.

I write to fight resignation. And I write to ward off madness.

(Even as I type this, I’m struck by the absurdly hyperbolic nature of that paragraph, and some part of me is rolling my eyes and saying, “Oh, for God’s sake, get OVER yourself.”)

At the end of that week of writing Ulrike and editing my manuscript, I felt different. As though I had finally swallowed down a pill that had got stuck halfway down my throat for two years.

The internet is full of articles about the importance of writing for therapeutic reasons, but I’ve come to the conclusion I feel better after writing or translating poetry, and after tweaking poems, for no loftier reason than that writing poetry is something to do.

The minutia of the “best words in the best order” provides a kind of mental absorption that produces a sedative effect on a wired brain and a perpetually nervous nervous system.

And, while most of my daily work supplies a happy drip-feed drug of escapism by virtue of concentrated effort, there is something about concentrated creative effort that soothes and subdues powerfully. Some people tinker with old truck engines, some build elaborate sandcastles, some whittle delicate hares from balsa wood. I potter about with line breaks, white space and rhythm.

Over the years, I keep returning to the idea of “flow” – a state of complete engrossment in an activity – because I find it enchanting that someone thought to examine that state which so reminds me of being absorbed in the intricate games of childhood imagination.

Mihaly Csikszentmihalyi, the psychologist who named the state, says that the best moments in our lives are not the passive, receptive, relaxing times, but when a person’s body or mind is “stretched to its limits in a voluntary effort to accomplish something difficult and worthwhile”.

But again: Why? What use is poetry? I can write as much poetry as I want, but it’s not going to un-kill Emmanuel Sithole, un-Trump politics or un-colonise the world.

Meera Alexander writes, “We have poetry/ so we do not die of history”.

In an essay, Alexander writes that “in a time of violence, the task of poetry is in some way to reconcile us to our world and to allow us a measure of tenderness and grace”.

Perhaps the poet Ted Kooser makes the most sense on why I write poetry when he says:

After all, there’s a significant service to humanity in spending time doing no harm. While you’re writing your poem, there’s one less scoundrel in the world. And I’d like a world, wouldn’t you, in which people actually took time to think about what they were saying.

Schimke’s debut poetry collection Bare & breaking won the Ingrid Jonker Prize in 2014. She writes, edits and translates for a living, and runs poetry writing workshops. Her second collection, Navigate (Modjaji), will be published in November 2017.

To take part in her workshop The Poem House, which will be presented in Cape Town and Johannesburg in October and November, email karinschimke@gmail.com. 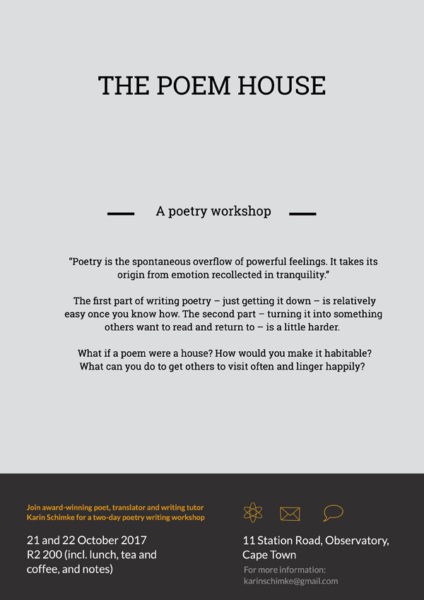