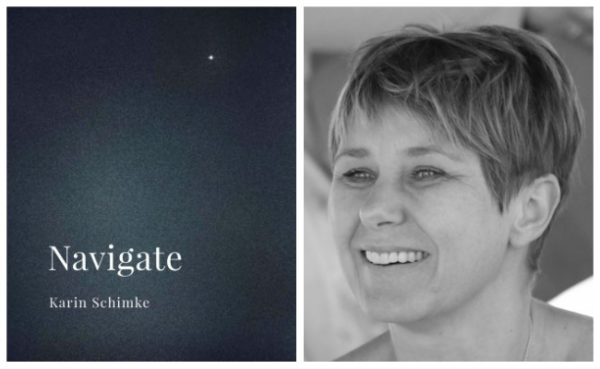 Karin Schimke's second collection is somewhat slimmer than her prize-winning debut volume and, for whatever reason, contains no Afrikaans poems. It is an unfortunate truism that second volumes of poetry often have a raw deal at critics’ hands. Poets are caught between the Scylla of continuing to write in the manner that made them prize winners, which gets them criticised for having little or nothing new to say – for not having developed – and the Charybdis of doing something new, different and innovative, and thus laying themselves open to criticism for not achieving the quality or technical verve of the first volume.

The figure of the father looms large in the early poems of the collection, introduced in the first poem, “Myopia”, as a man with “a monocle/ for the myriad mysteries/ he could fix and unpick”. At the same time, the paternal presence was emotionally labile, capable of violence, as we are shown in “The workshop”. This lability is the subject of a number of explorations of being damaged and hurt by the father, as well as the difficulty of trying to understand him. Indeed, what is his child, even as an adult, to make of a man such as this?

Everything chafed. But it was you all along: rubbing
your own sun-browned skin raw against the hemispheres,
always suspecting the existence of home.

Immigrants may often find it extremely difficult to live with a perpetual sense of deracination, always wanting to return “home” to a country that could well have changed significantly in their absence, to the point where they, too, would now feel alienated, to some greater or lesser extent, even in their homeland. The immigrants’ perspective on “home” is frequently distorted by nostalgia and aggravated by faulty memory. They tend to forget that they have also changed in many ways, not least by ageing. And language is always a central matter, as Peter Bland expresses it in his poem, “Advice to immigrants”:

For the rest of your life
there’ll be two sets of voices –
those in the street
and those in your head.

In the short, six-line poem entitled “Hybrids”, Schimke proffers a sharp criticism of her father’s life in his adopted country:

What were you planting and uprooting,
autodidact of turf and drought and flame-torch sun?
You never planted your bones here. Perhaps
you planted the nerves at the centre of your bones.
You grew hybrid languages and hybrid children.
Unlike God, you were not pleased.

He is a man more difficult to please than God. In “The workshop”, he has “a frown like a cocked gun across [his] forehead”, and when his daughter “needed to pee”, he shouted and grabbed her “by the hair”.

But, he becomes frail, attached to medical equipment, as we see in the poem “Superstition”, where he has been dehumanised to the point that he is depicted as a machine “plugged in/ winched, pumping air into the/ tubes and computers keeping/ themselves alive via you”. He even attempts some sort of change, a touch of tentative mellowing that still borders on volatility, as we discover in the fourth section of “Praxis”:

Schimke can be no less critical of the humdrum, predictable nature of many people's lives. This is “Spring outing”:

This image of social seediness reminds one of Larkin’s “Whitsun weddings” and its repulsive relatives.

I have chosen to focus on some of these intensely emotional, deeply personal poems, as they represent some of the best work in the collection. In other poems, the distance between speaker and subject tends to lessen the powerful emotion we have just seen.

For example, in “Praxis – four steps to understanding change”, which may be considered as a suite of poems, the first part (and the longest), titled “the wheels are coming off”, is a found poem dealing with wheel bearings losing their “perfect radial alignment”, while the second is a rejection of co-option, achieved by giving “my mouth to no one” and being “the ears of everyone/ and of my self”. The third section is titled “a short summary of revolution”, focusing on the paradoxes, including “nothing will/ remain everything will/ stay the same”. The final section, called “ferocious”, centres on her father. (Some lines from this part were quoted a little earlier.) Clearly, it is possible to see that all four parts deal individually with various processes of change, whether in the car, the revolution or the father. I find the first part somewhat incongruous, primarily because it is devoid of the emotional energy one feels in the other parts, particularly the last. But, it could also be argued that mechanical dysfunction is itself devoid of feelings, and that may account for its absence.

It is a pity about the misquotation or typographical error in the quotation from Alexander Pope’s “Ode on solitude”, which precedes the poem “The garden”. It is particularly noticeable because it is the epigraph. Be that as it may, throughout the volume, a wide range of subjects and diverse techniques are skilfully interwoven with a broad spectrum of emotions and finely tuned diction. The result is a second volume of poems which seems to have managed to achieve a balance between the two demands made of second collections; and that, in itself, is no small achievement.