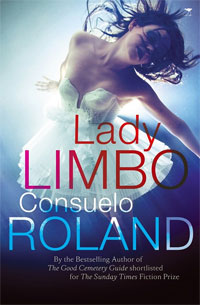 One of the central themes of Lady Limbo is the husband with a secret life. Gillian Flynn subverted the trope nicely in Gone Girl, but Consuelo Roland is more subversive still in this teasing literary mystery, the first book in a projected trilogy.

Who is Paola Dante’s husband, writer and romantic Daniel de Luc? When he disappears from a cruise ship en route to St Helena, leaving only unanswered questions, Paola must journey – like her namesake, the poet Dante – through the uncertainty, the unknowing, of the limbo that her life has become in order to find a redemption of sorts.

In a sense, her journey is allegorical: the Paola who relives the past (romance and marriage) for our delectation in the pages of the novel is also the Paola who is disembodied, a body in stasis, in the limbo of a coma after being struck by a car. Will Paola live, and if she does, will she find Daniel again?

Like Daniel, Paola, too is mysterious – a negotiated self in a complex narrative. When the novel opens, she uses her maiden name because she says it makes the transition to marriage “fluid and comment-free”. A few pages into the novel she has new business cards printed because being Mrs Dante-de-Luc “meant Daniel wasn’t a figment of my imagination”.

The sly tease in this metafiction is part of Roland’s modus operandi – she plays gleefully with notions of identity, and we see her variously as a victim, a symbol, “Ms Iceberg”, who can “wield a pool stick like a pro”, a woman who resists turning into her mother. “We all have many sides to us,” she muses.

The Paola who narrates allows us to examine the text for clues: Did the past predict the future? The reader must play detective, alongside Paola’s PI, Elijah Bloom, who is also looking for Daniel. The metafictional game is enlarged with historiographic detail: newspaper clippings, letters, extracts of the crime novels Daniel writes, the confessions and stories of other characters.

Roland builds up her narrative against the backdrop of contemporary Cape Town and Paris, so we are grounded in the familiar: beds, bars, a laundromat, an airport, a beach house. Yet this is a hall of mirrors, in which nothing is quite what it seems – where, for example, the crime novels Daniel writes are reality, while Daniel’s reality – his life with Paola – is a fiction. “Daniel had once said that every story was a metaphor,” Paola says – another allusion to the literary parlour game Roland encourages the reader to play. Yet it is also perfectly possible to read the book as a delicious piece of detective fiction; one can choose how much to read into it.

In much the same way as Margaret Atwood, one of her literary influences, Roland is not hidebound by the conventions of genre: the novel is variously a mystery, a love story, literary fiction with a touch of the roman noir about it. Roland even plays with the idea of genre itself, positioning Daniel as the crime writer with the nom de plume Gabriel Kaas, who writes a book called Lady Limbo. With a nod to Angela Carter, there are circus scenes and fanciful characters, like Enid Lazzari, who is as enigmatic as the hookah-smoking caterpillar in Alice in Wonderland and claims to be Daniel’s psychotherapist.

The romance plot is subverted: if Daniel has abandoned Paola, she will respond with her own kind of “abandonment”: “I have discarded Paola Dante-de Luc, she is the shadow of this other woman.” This, too, is a form of purgatory, since Paola’s heart belongs to Daniel. The reader will have nothing less, invested as he or she is in the extraordinary romance that Roland has conjured up.

One of the most interesting – and chilling – aspects of the story is that of genetic selection, with fiercely independent, wealthy women eschewing relationships and paying for “perfect” progenitors for their children. It’s something of an inversion of Atwood’s The Handmaid’s Tale, where women are “two-legged wombs” that serve the State; these women have the ultimate power: to pay for the best genes in the market. It is the child, Simone Sarrazin, who holds the clue to much of the past, if Paola dares to confront it. If Simone is part of Paola’s redemption, will Daniel be the sacrifice?

It is PI Elijah Bloom who reminds us that anything could happen (besides which, there are two more volumes to come out): “In Limbo, everyone’s still got a fighting chance. They’re coming up with redemptive acts the angels have forgotten. It could go either way …”