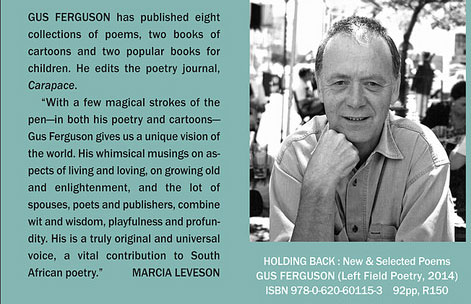 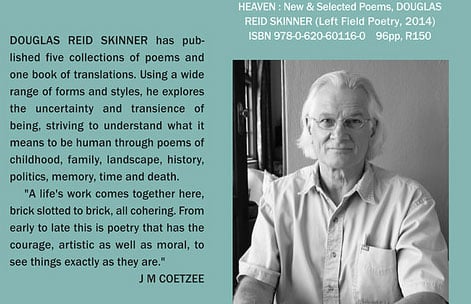 Gus Ferguson and Douglas Reid Skinner might grimace to hear themselves described as two of South Africa’s most senior poets, but the title is earned through more than mere longevity. Both have multiple collections behind them, and in their distinguished careers have acted as friends, mentors, publishers and comrades of the country’s finest poets (Don Maclennan, Tatamkhulu Afrika, Sydney Clouts, Robert Berold, Lionel Abrahams, Ingrid de Kok, Mzi Mahola, Jack Cope and Joan Hambidge, to mention only a few).

Though very different poets stylistically, Ferguson and Skinner are similarly preoccupied with time and transience, a theme they render with poignancy and wit. In Skinner’s title poem, “heaven” is gently mocked for having “no usable synonyms”. But this leaves the poet happily free to substitute his own images: “a blank page”; the “view south from Cape Point”; a “mind emptied/ of all its idiosyncratic obsessions and waiting only// for something resembling a salt-laden onshore wind”.

Time is a subject of enduring fascination for poets precisely because of its elusiveness. As Skinner says in his appropriately titled poem “The ruins”, which begins in medias res ( “… and there you were, thinking it would go on forever”): “I know of no factual present in which any of us/ actually lives”. Instead we are able only to perceive, ever more dimly, “what has already been: the remains of the meal”.

Skinner’s “The Present” masterfully brings together the impossible temporal concept of “the present” with the word’s unrelated meaning of “gift”. A child stands at the door of a birthday party, holding a present as well as his mother’s hand, which he must relinquish in order to go inside. The poem works as a companion piece to an earlier Skinner poem, “The Telling”, composed in an agonisingly irresolute litany of present participles (“coming in”, “stepping”) accompanied by an equally painful avoidance of the pronoun “I” that work together to convey the life-changing moment when a young boy is told by his father that his mother is not coming home.

Skinner’s gift is to sing in beautifully measured, musical lines what his unflinching eye sees. Such a poem is “In absentia”, which contemplates the subject of dying in general (“It’s said departing in your sleep is best”) before homing in on the death of a father who “may have turned and thought to reach the phone”; who “may have thought// to shout for help” as a shadow enters the room and squeezes his heart. The lonely man’s “half-eaten meal” is later found cold “on the green-baize folding table”. Then, in a wonderfully redemptive set of poetic shifts, Skinner imagines his father experiencing death as he might once have experienced going overboard at sea – falling without being caught – before drawing the reader close with a childhood memory of his father catching him as he fell overboard, a boy exhausted by a late-night father-and-son fishing trip:

“He grabbed my arm so tight, the skin was marked/ for weeks … He smiled, but never said a word.”

On the same subjects of ageing, death and transience, Ferguson is characteristically gnomic: “According to Heraclitus/ you can’t put your foot/ in Touws River twice.” Ageing is a subject that continues to depress Ferguson into mordant amusement: “The Geriatric on Looking at his 543 Emails” determines “to learn the art of deletion”, but on reflection concedes that “my brain/ with its ailing secretion/ is doing an excellent job.”

What I love in Gus Ferguson’s poetry is the way it mocks all forms of pretentiousness. This volume contains a cartoon of a naked man looking into a wardrobe full of empty hangers with the pointed caption: “The Emperor wonders what to wear.”

Rejecting ego, Ferguson’s poetry finds its greatest pleasure in endorsing losers, also-rans and the kind of little, crumpled-faced and dishevelled characters that also inhabit his cartoons. He identifies, perhaps, with “Leonardo’s apprentice, Stefano”, who “drew the perfect circle, and then,/ embarrassed, wiped it out.”

Holding Back contains classic examples of Ferguson’s divinely inspired succinctness and understated comic and poetic genius: “Disengaged but not Detached” (about “the joys of cancellation”); “Stressed, Unstressed” (a poem of consolation to any poet who has been remunerated with a box of Nutties); “Kamikaze” (a heart-breaking poem about the willingness of sperm to ejaculate); and several miscellanies of “haikoids” and snapshots, including:

He hurt each and every time
he wasn’t chosen for the team.

Gus Ferguson and Douglas Reid Skinner are generous poets who live in their works as real characters (worried, bereaved, amused, enamoured) and who mind about their readers. As Skinner has it in his untitled poem addressed to an imagined reader:

For years I’ve wondered at your shape,
Your hands, your face, your lips,
Your body’s brimming blocks and planes,
The puzzle of your hips.

I’ve longed to smash the glass and reach
Right through and touch and hold
The you that’s you, utterly embrace,
If only for a minute.

It’s the kind of embrace that’s possible in these very welcome New and Selected collections.