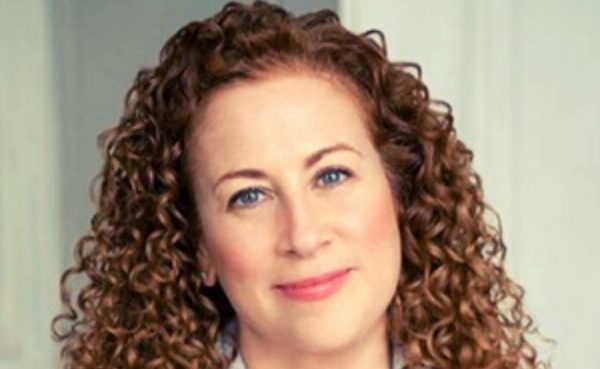 If you enjoy fiction in which morality is questioned and opposing views on problematic topics are presented in such a way that you start to question your own beliefs and opinions, you might be familiar with the work of American author Jodi Picoult. Most South Africans will know her as the author of My sister’s keeper, a novel that was brought to the big screen in 2009.

A few years ago, a selection of her novels were reprinted, and I first discovered them in a big wooden box in a local bookshop. I started buying them one at a time, at first cautiously dipping my toe into the murky waters of ethics and morality, and returning soon afterwards to buy all of the remaining Picoult books in the store. When I heard that Deborah Steinmair, Afrikaans author, and Sara-Jayne King, journalist and CapeTalk broadcaster, would be conducting an interview with Jodi over Skype during this year’s Toyota US Woordfees, I jumped at the opportunity to attend.

They say that sometimes it’s best never to meet those you admire, because it might ruin the perception you have of them. However, I was in awe of how friendly, intelligent and down to earth Jodi is (even though my impressions could be drawn only from video chat footage on a big screen).

Very few South African authors can make a living from being an author in the way that Jodi does. The market here is different and much more difficult to navigate. However, Jodi works extremely hard to maintain her level of success, and never stops writing. She says she doesn’t believe in writer’s block – writer’s block is for those who have the luxury of time. She writes anywhere and everywhere. Writer’s block can only be a myth; how else can it disappear so easily the night before a deadline?

Jodi has written many bestselling novels, and also holds honorary doctor of letters degrees from Dartmouth College and the University of New Haven. Jodi’s books have been translated into 34 languages, and it is therefore no surprise that Plain truth was recently translated into Afrikaans by Daniel Hugo, published as Die belydenis. 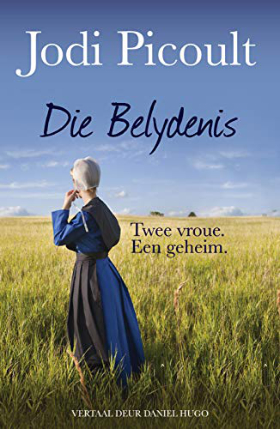 Although Jodi is passable in French, she can’t speak any other languages and can’t truly evaluate any of the translations of her books. There is always the fear of rich descriptions and specific language use in the English getting lost in translation. The translators contact her for help translating certain terms, but she has to trust them completely. She believes Plain truth to be the perfect first book to be translated for the Afrikaans market, since the Amish are central in the book, and their ancestry goes back to the same places where Afrikaans has its roots.

What Sara-Jayne wanted to know was how you go about writing about the Amish, when their community is so private. How can you accurately portray their culture and lifestyle? Jodi’s research started when she read forums online, even though she was aware of the fact that the Amish don’t generally have computers. Eventually, she received an opportunity to live with an Amish farming family for a while to aid her in her writing process. She soon realised that to this community, deeds are much more important than words, so she decided to let her actions speak for her. She joined in when the family would do their Bible readings, and the family accommodated her by using an English Bible, as opposed to a German one, so that she could understand.

Among the things she learned about this community and culture, is that the Amish attend school only up to a certain age. As teenagers, they get a year in which they can go out and explore the world, and by the age of 15 or 16, they are baptised when they make a conscious decision to join the faith. Many of them stay within this very isolated community and marry only within this group. If you decide to renounce your faith, you are excommunicated. They value inclusivity, and even when you have done something wrong, the punishment isn’t as important as, for example, in a modern society, where imprisonment or isolation is the norm. If you repent and apologise for what you have done, you are welcomed back into the group.

In Jodi’s writing process, she first does a lot of research. But that can only get you up to a certain point – eventually, a lot comes together when talking to people face to face and hearing about their experiences first-hand.

Since many of the topics Jodi writes about do not come from her own life experiences, Sara-Jayne wanted to know whether people should be writing other people’s stories in this day and age. Jodi answered truthfully by saying that many black people, for example, have a story to tell and could write the same book she can; however, they are less likely to get book deals with publishers. Jodi’s approach is to let her books speak to the people who look like her. She doesn’t try to show black people what their lives look like; she writes to raise awareness among her peers, people like her. Sometimes, it is impossible to write a story without having a narrator or a perspective with a background different to the writer’s, which makes it important to have sensitivity to readers before the book is published, to ensure she accurately conveys a specific group’s culture or lifestyle.

Jodi believes that an author has a major responsibility to be respectful towards anyone they write about. There is no writing police, but writers have to be aware of their ethical role. Some successful authors become complacent and feel less need for responsible writing, because their books will sell anyway. On the other hand, she feels privileged to have a large audience and a platform to reach them, and she must use this opportunity responsibly.

Fiction has the amazing ability to open minds. You can discuss controversial issues in a way you can’t in non-fiction. People close the book and really think about the topic. Jodi likes to educate her readers, as was the case with her novel Small great things, tackling the topic of racism and privilege in America. Many of her readers gave feedback and said that the book made them realise how privileged they are.

Jodi is known especially for her books covering controversial topics, such as racism, abortion rights and the death penalty. How she approaches these topics is to show all sides of an argument, introducing characters with different perspectives, all the while working her research into the narrative and educating the reader. She emphasises that she doesn’t write about a topic until she understands it herself.

Deborah wanted to know where Jodi finds herself in terms of genre. Jodi is anti-genre, and confesses that at the start of her career, publishers and marketers didn’t really know where to place her books, because they didn’t quite fit into a category. People were trying to push her writing in a more commercial direction, and even though you can have poorly written or well-written versions of both literary and commercial fiction, she wanted to keep writing about the same topics. 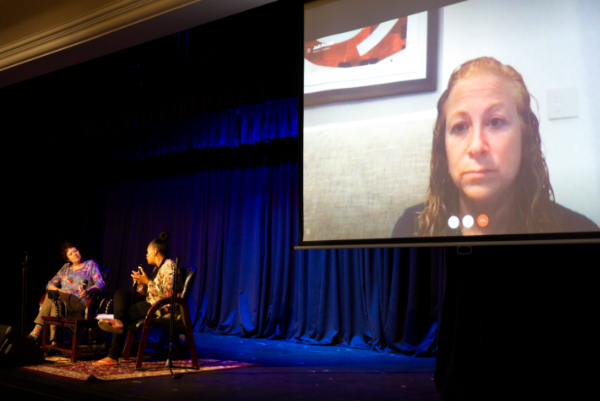 What bothers her about the concept of genre is the way women are pigeonholed into romance, children’s literature and chick lit. It limits so-called women writers (which is also a problematic term, because why are male writers simply called writers and not male writers?). She is a woman and a writer, but doesn’t write women’s fiction.

After the interview, I realised that I now admire Jodi both as a person and as a writer. Listening to the reasoning behind her writing process will make me appreciate her books even more in the future. She has an amazing ability to investigate and portray controversial topics without prejudice, and in a way that really makes you question the way you looked at and thought about those topics before reading what she has written. I am looking forward to reading Daniel Hugo’s translation of Plain truth, and I hope that Jodi’s voice is weaved through the Afrikaans like a golden thread.