To be sure, there is much to take pleasure in with this capacious novel. 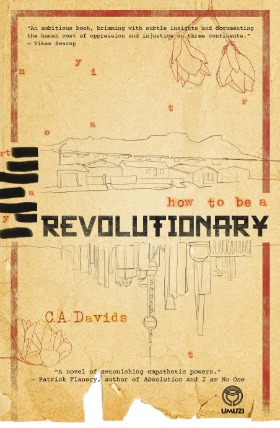 How to be a revolutionary, the intricately detailed new novel from CA Davids, is a moving piece of fiction that winds its way across time and culture to tell a story about betrayal, complicity and the way human lives are crushed under the heavy boot of repression. The author’s previous book, The blacks of Cape Town, was one of the landmark debut novels of the 2010s, a worldly work that engaged the often too-overdrawn questions of memory and race in a deeply complex and thoughtfully readable way.

Davids’s new novel returns to the scene of memory, spilling over with unexpectedly intertwined moments of storytelling that form a bridge to the past. The narrator, Beth, is part of the South African diplomatic corps in Shanghai. She has left a soured marriage and a festering sense of disillusionment behind, immersing herself in the teeming Chinese metropolis. Her narrative backs up against the story of her enigmatic older neighbour, Huang Zhao, a former Party journalist struggling to come to terms with his place in the blood-soaked history of 20th-century China. Over the course of the novel, Beth struggles to make sense of her failed marriage, enters into a desultory relationship with a writer (who will, as in all novels, return to his wife and child) and drifts along on the stream of inexplicable and unfeeling humanity that makes up the populace.

But this is not Lost in translation on a Chinese stage. Davids avoids the mire of Orientalism by neither festooning her narrative with the virtue-signalling italic swish nor treating Beth’s experience of China as a maze of incomprehensibility. Instead, we read a supple story that lets us into the lonely exilic experience of being a diplomat in a foreign country:

How utterly unprepared I’d been for weekends when infinitely tall, boundless apartment blocks burst, dumping industrious people – contained for the whole week – into the streets, parks and shopping centres with a clamorous joy.

There is a palpable sense of listlessness as we watch how Beth shops at the South African store and takes long aimless walks, where she looks at the architecture and thinks about her recently ended marriage. But all of this is interrupted when Zhao turns up at her door unexpectedly, seeking a word:

“You are writing something in English?” I asked. He nodded. “Then it depends on how you will use the word. What’s the context?” I said, smiling now but maintaining the door at 45 degrees. I was equally perplexed and intrigued by the stranger and wondered why, of all the doors he might’ve approached, he’d come to mine.
“No …,” his face broke into a bemused smile, “I am sorry cannot give.”

The early part of the novel patiently winds around the eccentric and awkward friendship that develops between the watchful Beth and the seemingly inscrutable Zhao. The pair develop a friendship that draws Beth out of her shell and allows her to see a different side of the city she has been living in. Where many novels founder on the task of picturing the cultural other, How to be a revolutionary does well to shape Zhao’s inner world. Where many novels tend to give their “foreign” voices an appallingly strained stateliness (so that characters sound like 19th-century aristocrats) or place unnatural tracts of unwieldy exposition in the mouths of characters (which assumes your reader is a moron), Davids has penned a character who fluidly constructs a world into which the reader can be initiated.

The third part of the narrative troika that pulls this novel along is in the form of correspondence between Langston Hughes and an unnamed South African writer. These missives, written in Hughes’s voices, tell of a series of events that Hughes was party to in 1930s Shanghai, and the repercussions of those events 20 years later as he faces questions from the witch-hunting anti-communist trials of Joseph McCarthy. In the 1950s, Hughes was regarded as passé, a fading star from an age now out of vogue. Davids does well with this conceit, creating a character whose geniality and pathos fills out the often-hidden quiddity of the writer who was for years submerged beneath banal and trivialising Harlem platitudes.

If this seems like a rather complicated novel to work through, there’s more still. Undergirding Beth’s and Zhao’s intertwining narratives is a set of backstories about each character’s political activism, a device that helps us to understand how both characters are damaged by losses that are ungrievable. For Beth, the lingering trauma is the tragic and brutal death of her friend Kay, a student activist. When Beth and Kay meet, they form an instant bond over their love of reading, and their friendship introduces the adolescent Beth to a new world of political protest in stark contrast to the head-in-the-sand complicity of her parents. But Kay is tragically killed when a bomb she has been instructed to plant at a police station detonates prematurely. Beth finds herself under a cloud of suspicion that she has difficulty shifting.

Zhao’s memories, meanwhile, document the blistering rise of Maoist fervour, stretching from the terrible famine years of the 1950s through to the student massacre that closed the 1980s. The gnawing question at the heart of the narrative is Zhao’s desire to understand how such a national madness could have held sway for so long. He has plenty of cause to think about his own involvement, what he turned a blind eye to or encouraged in his role as a party journalist. For Zhao, the unspeakable grief of having lived through China’s long Maoist horror pushes him to write, at great risk to himself, a corrective testimony. Beth’s early suspicion that Zhao is the source of the mysterious typing noise she has been hearing in the small hours, proves to be accurate, and before she knows it, she finds herself the unexpected guardian of a story she is ill-prepared to protect.

This novel’s conceptual boldness lies in its interest in working through the difficult task of truth-telling in all its forms. The book is rich in narrative points that call and loop across to each other. Beth’s confession before the TRC finds its echo in Zhao’s encrypted telling and in Hughes’s account of his testimony before the McCarthy subcommittee. What the novel has to say about the workings of memory is deeply engrossing, and marks Davids as one of the better writers grappling with what are often quite irreconcilable subjects.

To be sure, there is much to take pleasure in with this capacious novel. Davids has a grasp of detail that allows her to build scenes like this:

From a narrow alleyway, deep in the shadows of the vertical city, we stepped through an arched opening in a huge stone wall and emerged into a courtyard. A handful of elderly people milled about in their summer pajamas, immersed in the ordinary drama of life: playing cards, talking and drinking tea among their collective detritus – bicycles, plastic wash basins, floor mops, a chair or two holding up, it seemed, all of Shanghai’s unused things.

Davids’s writing flows in a path through Zhao’s life story naturally, rather than too-strenuously aiming to convey something to the reader. These sections give the novel a truly worldly feel, and it is a testament to the author’s ability to craft a work that is historically complex without being leaden.

In a field of recent South African novels that have been marked by a dire need for more judicious editing, the deftness of Davids’s plot is striking. But the paring back of story is often replaced by a compensatory telling where showing would have sufficed, so that the Cape Town episodes that fill in Beth’s backstory feel greyed over and voiced over in a hollow way. As it is, Kay feels like something of a one-dimensional plot contrivance rather than a whole human character, because the novel’s pacing doesn’t allow us to fully appreciate her as a character. She speaks in revolutionary aphorisms, but while this may be how the young Beth experiences her friend, it doesn’t help us to understand her or what her hold over our protagonist is.

The weaknesses in How to be a revolutionary are not an obstacle to enjoying the novel. They are slippage points in the otherwise tight authorial control of a novel brimming with enough artifice to invent a world of unmourned lives. Most reviews will damn the novel with faint praise by calling it “ambitious”, and it is indeed difficult not to admire the juggling act that Davids pulls off in making this novel as cohesive as it is. A commendable and assured novel, How to be a revolutionary is well worth reading.