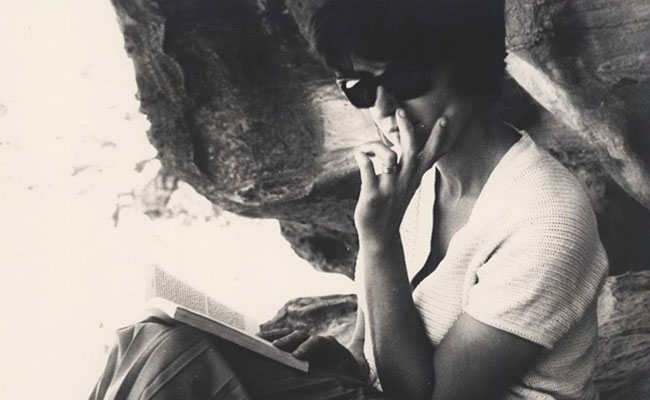 The artist Judith Mason (78) died in White River on 29 December 2016. Much has been said (and it’s already in the public domain) about her fine art and important work. Herman Lategan decided to take a different angle and ask her daughters Tamar and Petra what they remember about their strong, gentle mother.

Tell us about you mom’s early life.

She was born on 10 October 1938 in Pretoria and spent her early years in Zeerust, then Bushbuckridge (her father was a Native Commissioner), where she taught herself to read and write, starting school only when she was about ten years old, in Pretoria.

A bit about her later personal life?

She married Wits archaeologist Revil Mason and divorced him in the early seventies. She remarried in 1981 (printer Bruce Attwood becoming her new husband) and was married to him for about ten years.

What do you remember about your childhood with her?

Her working all the time and sharing her passion for politics, feminism, music, reading and social justice with us. Being proud of having an eccentric mom who did not have kidney-shaped flower beds in her garden and who did not wear matching skirt and cardigan combos or ever set her hair in curlers. She wore painting overalls and comfy leather sandals and drove a beaten-up Peugeot 404 in which you could watch the tar through the rusty holes in the floorboard.

She loved travelling and spent her honeymoon travelling to the Belgian Congo, Uganda and Kenya with our father. She also went on trips to India and Nepal, Italy, Egypt, Israel, The Ivory Coast, all over Southern Africa and more recently the USA and Zanzibar.

Apart from art, what were her other passions?

Reading. Everything from politics, psychology, art theory and poetry to thrillers and detective novels – an addiction she passed on to me and her granddaughter, Maru Attwood. She loved politics and cricket and would tear herself away from work when these got interesting to watch on television.

She loved music too and her preferences were as wide as her literary tastes. Feeding the bushbabies, squirrels and birds in our garden.

Which people greatly influenced her life?

Does or did she have any siblings?

She has an older sister, Lin Anderson, who was a Rand Daily Mail journalist and a younger brother, Justin Menge, who was in the South African Air Force. They are both still alive.

Did she have a routine when she worked?

She worked every day, Monday to Sunday, from when she woke up till sometimes late in the evening, throughout our childhood, and kept going like that until her health started to fluctuate. Her studio is full of notebooks and sketches as well as paintings, drawings and assemblages that she was busy with.

She coped with her two weeks in hospital / frail care by working out in her head what she would be working on next. Her grandson Simon had recently found a cache of baboon skulls in the veld and had given them to her and she was using these as references for a new body of work.

Simon had also given her over 200 snares that he had removed from the bush in the valley that we live in and she was working out how to incorporate these into work.

She wanted to complete a number of large works in her studio in White River for a final big exhibition in October 2017 before moving to a much smaller home in Swellendam, as Cape Town and Hermanus were too expensive.

How long was she in White River?

She lived in a house on our property in a farming area outside of White River for the past fifteen years. It was the longest that she had stayed in any one home. Before that she had stayed in 12 different homes since I was born (I am 50). We converted a rather ramshackle farmhouse into a studio and living space for her.

What influence did she have on you and your sister’s lives?

To live with as much integrity and to be as authentic as possible.

What made her angry?

What made her joyful?

The robins in the garden singing extra-enthusiastically when she played Bach.

Is there something quirky and eccentric about her that stands out?

Her walking stick of choice in her final months was a rough blue gum pole. She loved Quality Street chocolates, Rajasthani puppets and animal skulls.

Did she have a signature dish that she liked to cook for you as children?

Gunge, which was a fried mix-up of potatoes, onion and tomatoes with a good dash of parsley.

Did she have a specific way of dressing?

She loved comfortable clothes and had a preference for purple items.

What taste did she have in music?

Everything from Mozart to Lil’ Richard, Leadbelly, Pete Seeger and Dylan to opera and Aaron Neville.

If you had to describe her to someone who never knew her, what would you say?

After you moved to America, did she come and visit?

I'm living in Miami now and it’s close to New York, about the same as Cape Town to Johannesburg in distance. I spend a lot of time in South Africa, and was here for her birthday on 10 October 2016.

Her dear friend Marguerite Stephens of the Stephens Tapestry Studio hosted a birthday party for her in Johannesburg.

Her retrospective in 2008 was major, but I am not sure the “art press” covered it – it was at the Standard Bank and also in Stellenbosch. A catalogue was made.

I am her archivist. I began the archive in 2004 as I was struck by a Buddhist quote I saw on the window of the Rubin Museum in New York while dashing by in a cab. The quote read: “Your most important work is right in front of you.” I read that as a sign to preserve Judith's legacy. My archival research formed a large part of the research for her retrospective – amazingly, Judith had never kept an archive of her work. I have a lot of images.

I am grateful we decided to go ahead in 2015 and publish a small book, The mind's eye: an introduction to making images. The book has almost sold out in one year. It was launched at Art on Paper last December.

I tried for years to get a publisher to do a proper artist’s book, but art publishers these days expect to be paid. She had a big show she wanted to do; she told me she had one last big show in her. Her recent beautiful exhibit, Undiscovered Animals, was a sell-out.

Which quote by her stands out for you?

"I paint in order to make sense of my life, to manipulate various chaotic fragments of information and impulse into some sort of order, through which I can glimpse a hint of meaning. I am an agnostic humanist possessed of religious curiosity who regards making artworks as akin to alchemy. To use inert matter on an inert surface to convey real energy and presence seems to me a magical and privileged way of living out my days.” (2004)