In the heart of the country, on the N1 near the halfway point between Cape Town and Johannesburg, lies the Karoo town of Richmond, annual host of the JM Coetzee Festival in winter and the bigger BoekBedonnerd bash in spring. The village, founded in the 1840s and part of the Northern Cape, is experiencing a small revival since it became a literary tourism destination. Festival founder and organiser Darryl David’s vision has become a reality. 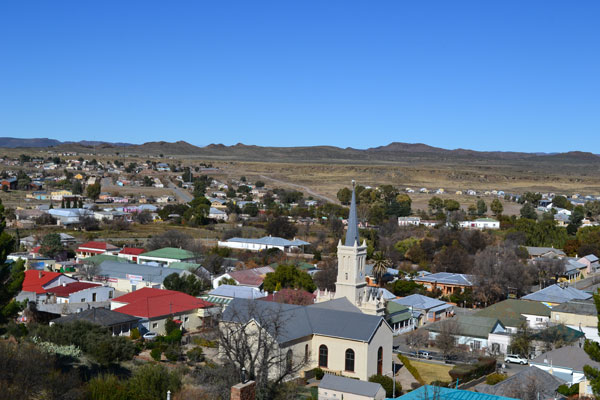 This photo of Richmond was taken from Vegkop, as I stood among the ruins of a British fort dating from the Anglo-Boer War. In the distance are the townships Sabelo and Louis Pienaar, where mostly Xhosa and coloured people live. 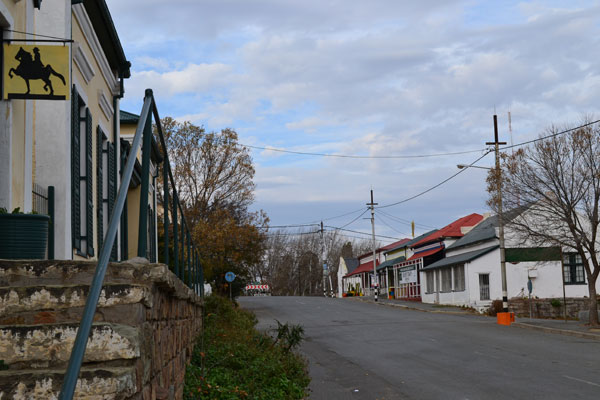 A one-horse town it might be, but it has reinvented itself as Booktown Richmond and now most of the old Karoo houses in this photo are interconnected and filled from floor to ceiling with second-hand books. Thousands of titles, including many antiquarian rarities, await perusal and purchase in a labyrinth of rooms. There are bargains to be found, but the Africana can be expensive. 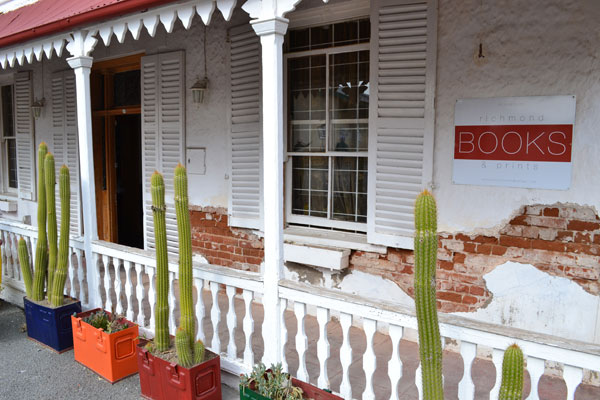 At Richmond Books & Prints I bought, after managing to negotiate a discount, several volumes of poetry by Sheila Cussons: all the missing titles I needed to complete my collection of Cussons’s work, including her rare 1981 book of Afrikaans translations of short stories by Jorge Luis Borges. 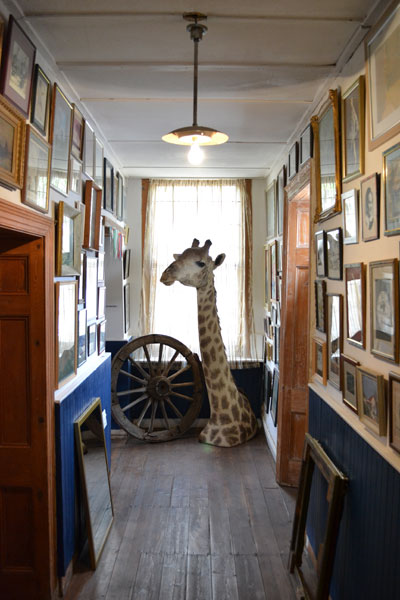 To be greeted, while exploring a second-hand bookshop, by a third of a giraffe (or a hybrid of a giraffe and a giant slug) can be somewhat reminiscent of Borges’s The Book of Imaginary Beings. 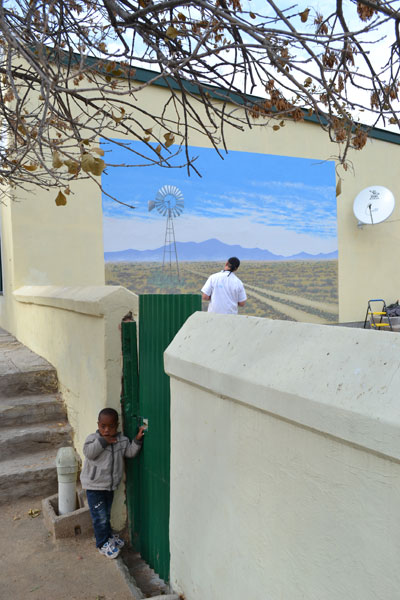 Meanwhile a local boy is curious to see how artist Mike Norris paints a Karoo landscape on the wall of the Richmond Info building. 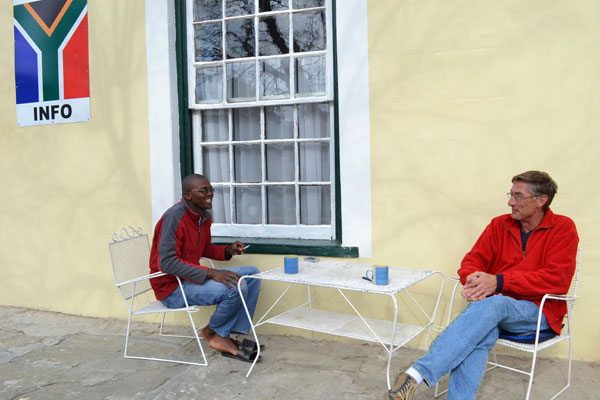 On the stoep Marcus Siwa of the Richmond Info office shares a joke with Michael Drysdale, webmaster of the town’s homepage. “The people here call us Oupa and Ouma,” says Drysdale while I photograph them. As if on cue, a police vehicle slowly passes and through its window a friendly officer shouts, “Oupa en Ouma sit op die stoep!” (Granddad and Grandma are sitting on the veranda!) Drysdale, chuckling, adds: “We don’t know which one is Oupa and which one is Ouma.” 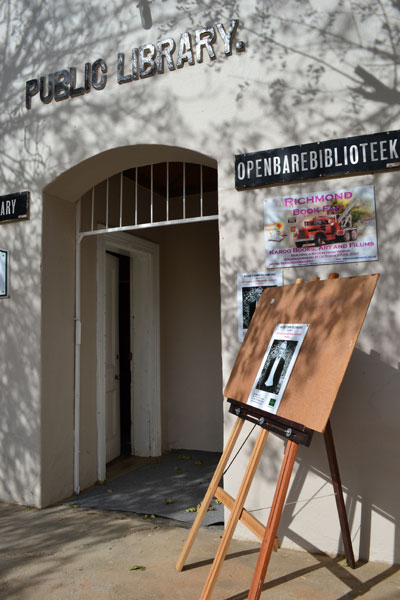 Sessions are free. Interesting and important issues are voiced in a building which from the outside unfortunately resembles a prison (though it is cosy inside). There are talks about Coetzee’s life and writing, but other authors are also discussed. The Treasure the Karoo Action Group (TKAG) is given an opportunity to advocate against the evils of fracking and we hear about the good work by Booktown Richmond, the Richmond Community Development Foundation, Hope in Richmond and the Northern Cape Provincial Library Services in advancing reading among children in the area. 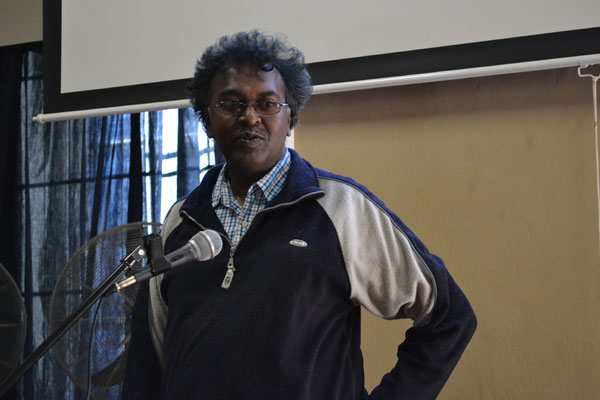 Darryl David, founder and organiser of Richmond’s literary festivals, is also responsible for the Spirit of Schreiner Festival in Cradock and the Midlands Meander Literary Festival in KZN. At this year’s Coetzee Festival he gave a talk on the coffee-table book Jewish Memories of Mandela by David Saks. It contains fascinating historical photographs, often reproduced extra large, as well as significant facts. Many people do not know, for instance, that a Jew, Lionel Bernstein, was responsible for the drafting of the text of South Africa’s Freedom Charter as it still stands today. 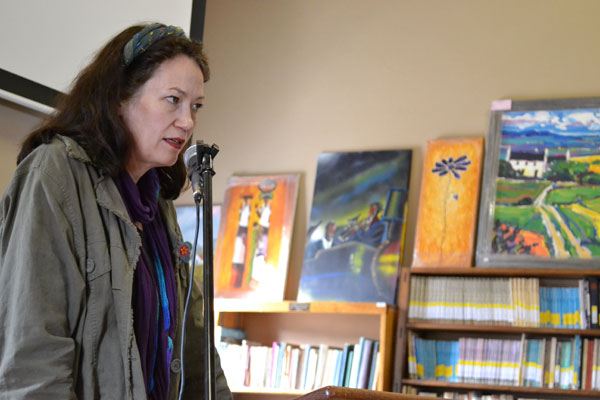 Deborah Steinmair, award-winning author of Marike se Laaste Dans and Poppekas, spoke on why she wrote a novel about Marike de Klerk, murdered ex-wife of former president FW de Klerk. “She haunts me,” Steinmair said, “even though I was not taken with her.” According to Steinmair, Marike outshone her husband academically at university, but could not have her own career because she had to conform to the woman’s role as then prescribed by Afrikaner patriarchy. “She was a poster girl for Afrikaans Christian Nationalism, which she did so well, only to end up the way she did.” 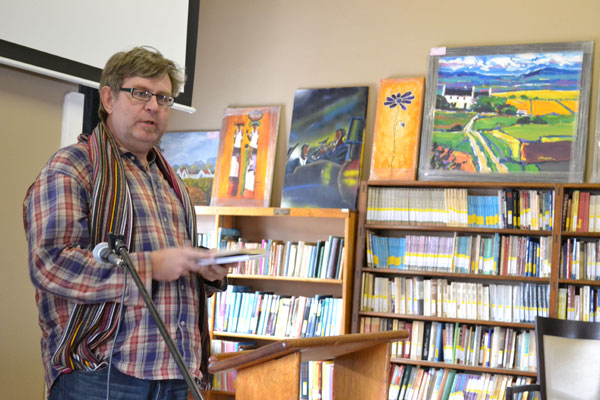 Marius Crous, poet and academic based at the Nelson Mandela Metropolitan University, compared Coetzee’s translation of Wilma Stockenström’s Die Kremetartekspedisie (published in English as The Expedition to the Baobab Tree) with the original Afrikaans text to shed light on Coetzee’s work as translator. The Afrikaans novel Coetzee chose to translate into English is a poetic narrative about a slave woman, the sole survivor of a failed expedition into Africa, who relives her life story while hiding in a baobab tree in the wilderness. 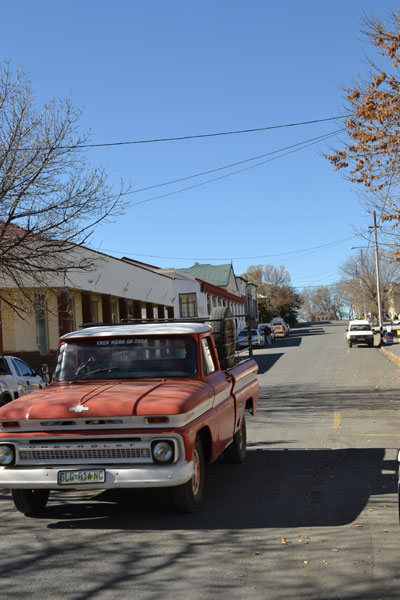 Scenes from provincial life meanwhile continue outside the festival venue as a vintage pick-up truck drives down Richmond’s Long Street. 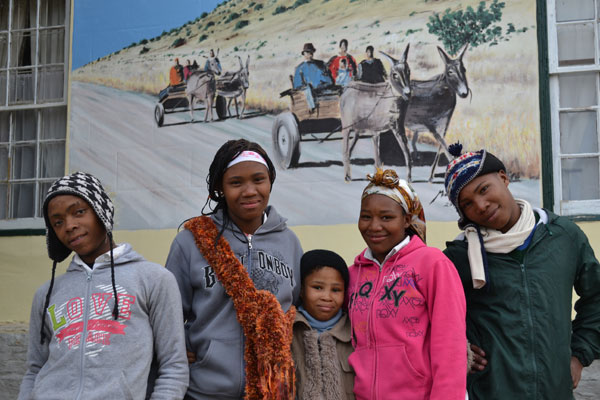 There is love in the heart of the country. As elsewhere in rural South Africa, in Richmond the people often are beautiful and loveable. I happened upon this snugly dressed group on the corner of Leeb and Loop Streets as they admired a Mike Norris mural of Karretjiemense, the topic of Michael de Jongh’s recent book on the marginalisation of South Africa’s first people, Routes and Roots: Karretjie People of the Great Karoo. 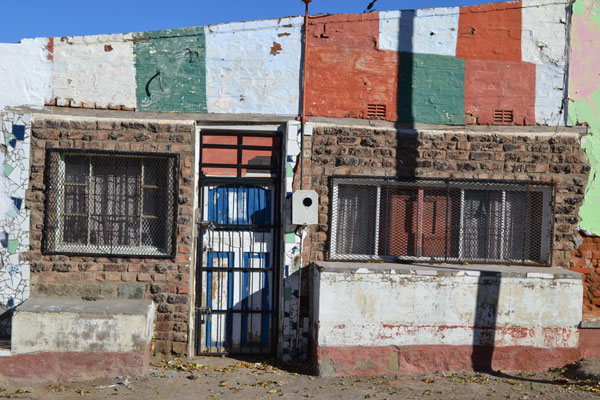 There are humble but perky houses with plenty of character on the side of Richmond closest to the township. Yet one cannot turn a blind eye to the poverty and lingering apartheid-era social divisions. I saw few people of colour inside the festival venue. People that live in houses like this one should also attend the sessions. I heard tales of dirt-poor farm workers and malnourished children. When a coloured man begs for money from a festival-goer, a local white woman intervenes and tells him to go and ask President Zuma. He shoots back: “Ek wetie wa’ hy bly nie!” (I don’t know where he lives!) 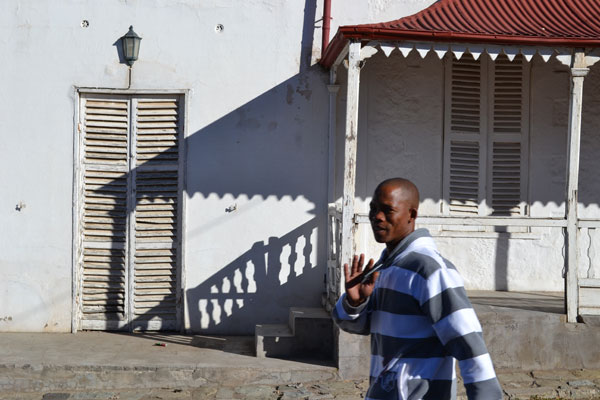 At the far end of town, while I photograph the side of an old house and the shadow play on its wall, a man on his way to the township unwittingly walks through the frame at a brisk pace. His friendly greeting shows you can be brisk without being brusque. 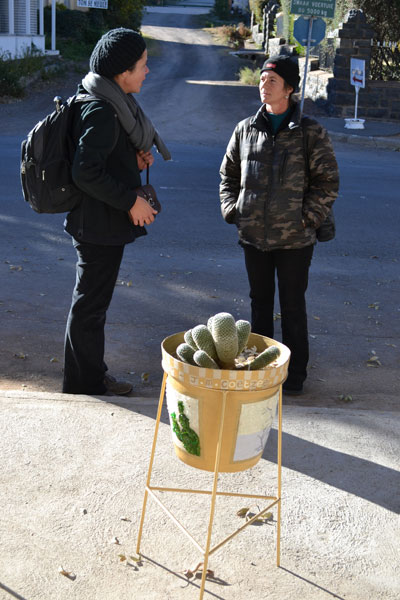 In Loop Street two festival-goers stand outside the public library basking in the glory of what might be the world’s only pot plant that invokes the spirit of JM Coetzee. If you lick the thorns. 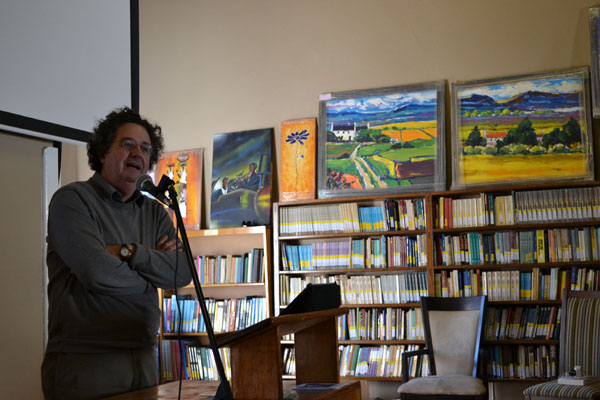 Anton Harber, author of Diepsloot and head of Journalism and Media Studies at Wits, delivered the festival’s Nadine Gordimer Lecture. He explored issues around freedom of expression and the right to dignity in the wake of the fracas over Brett Murray’s The Spear. Harber said we have an imperfect but vibrant democracy that deserves to be celebrated. We should avoid being stuck in doomsday language and apocalyptic views of the country. “If our democracy is less than perfect, we say it is dying. If a bill passed by parliament threatens journalists, it is the end of freedom and farewell to investigative reporting. If we lose a political battle, we think we have lost the final war ... We need to learn to embrace controversy, dispute, debate, and not see every element of it as a threat to democracy ... [We need] not treat every lost argument, every setback we suffer, as the end of democracy. We need to celebrate our freedom and not live in fear for its loss.” 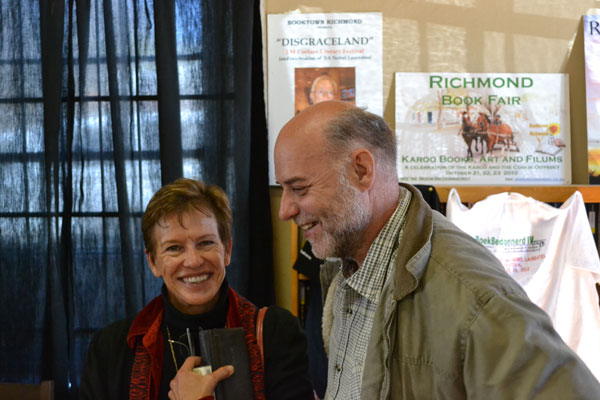 Helize van Vuuren of the Nelson Mandela Metropolitan University spoke about the links between Coetzee’s Waiting for the Barbarians and Stockenström’s Die Kremetartekspedisie, which was submitted for publication four months after Waiting for the Barbarians was published in 1980 and which impressed Coetzee enough for him to translate it into English. Van Vuuren explained how Stockenström’s book can be seen as a reply to Coetzee’s. With her is Johan van Wyk, noted Afrikaans poet and author of the English novella Man Bitch, an underdog’s tale set in post-apartheid Durban. 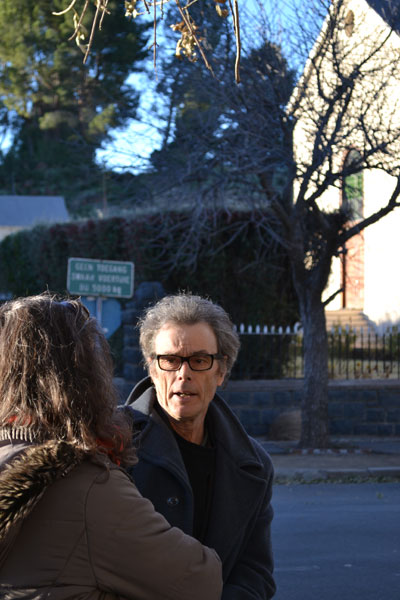 John Nankin – art director, theatre practitioner and researcher – gave an entertaining, haphazard talk entitled “Johannes Pienaar: Teacher, Actor, Playwright, Politician, Psychologist, Husband of Helen Martins”. Pienaar, who changed his surname to Pinard, lied about being born in an Anglo-Boer War concentration camp and about studying at Oxford. He made a name for himself overseas as a psychologist and mystic. Nankin’s topic had an air of synchronicity about it: Pienaar’s life was recounted a few metres from Richmond’s Pienaar Street and close to a township also called Pienaar. 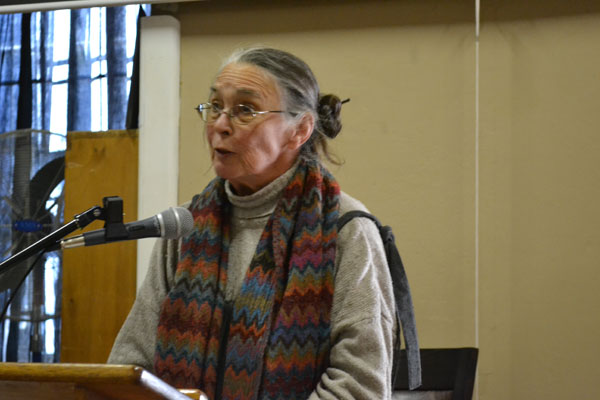 Elza Miles, award-winning author of groundbreaking books on some of South Africa’s leading black artists, focused on Jan Schoeman alias Outa Lappies. The legendary Karoo philosopher-artist was a “pitch-black man who spoke beautiful Afrikaans”. Schoeman, who lived in poverty, died last year from burn wounds he suffered when his multi-coloured patchwork coat caught fire. He travelled in a “karretjie” (small wagon) and was known for his embroideries and art made out of recycled and found objects. Miles believes Outa Lappies’s creations transcend easy labels such as “outsider art”. 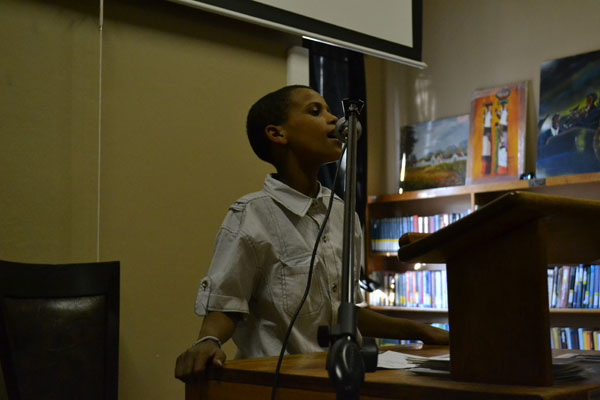 At the end of the festival, as the light of the afternoon faded, a local youngster (whose name I was too slow to get) took the podium after volunteering to sing a song “for a R10 donation”. He rhythmically interspersed the verses of his Afrikaans song with click sounds, the same clicks we hear in Xhosa, clicks that confirm our Khoisan heritage. 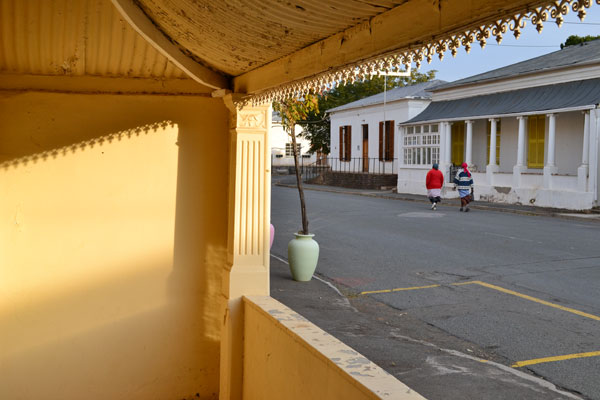 Back in the city, with this photo taken from the stoep of Richmond’s An-Ra Bed & Breakfast on the computer screen in front of me, I phone Adromeda van Rheede, a Richmond-born coloured woman who has worked at An-Ra for eighteen years. I ask her about integration, whether it is happening. “The Xhosa and coloured people are mixing more than before,” she replies. “We help each other a lot. Many people are getting together through the churches.” I ask what the literary festivals mean to the people of the town. “It means something, a lot,” says Van Rheede. “The festivals bring people into town. Our dorp is becoming more prominent now. I think it even helps the economy, a bit.”

The last word belongs to Coetzee, from his novel Summertime, his drollest book, one in which he artfully and playfully subverts biography. He writes, “He longed for the day when everyone in South Africa would call themselves nothing, neither African nor European nor white nor black nor anything else, when family histories would have become so tangled and intermixed that people would be ethnically indistinguishable, that is to say – I utter the tainted word again – Coloured. He called that the Brazilian future. He approved of Brazil and the Brazilians. He had of course never been to Brazil.”

Photos and text by Waldo Muller