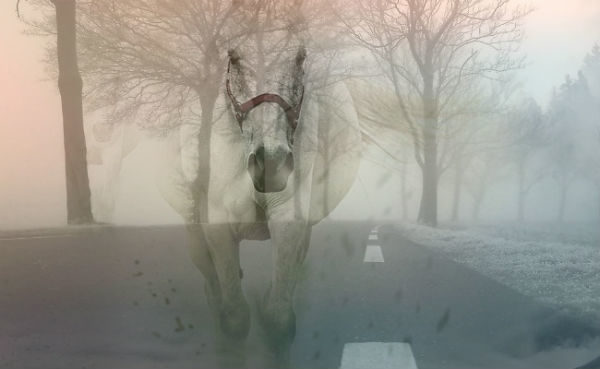 Winter morning near Ixopo
For Gisela, who was with me

Walking the uneven gravel road, we are cold, cautious.
Forest pines snag the mist; in the soft, eddying snow
the road ahead is a weave of white and grey, visibility
measured in inches, where human geometries dissolve,
and ears are more useful than eyes; invisible streams
go brawling down their narrow mountain runnels.

The road quakes beneath approaching hooves:
six dark shapes – ears, eyes, nostrils – and a colossal
presence come to the abrupt halt of confrontation.

So this is Equus, wrought by the blue-haired god
from the ocean’s fury, authority and defiance
plaited into every fibre; the incarnation of myth.

Motionless we stare quizzically at one other;
his breath opalescent from flared nostrils.
He remains tentative, poised for quarrel.

Then he is done with us, aware that comingling
with gods for too long deludes the human ego.
A juddering snort and his pulverising hooves
thunder into motion to be quieted by distance
and snow until all is white and seamless again.

stands on the Welsh dresser; its cheery barrel-shape silver-plated
with 70 engraved on it. Tarnished and dusty now, it was my father’s
birthday present. 1988. He enjoyed a beer with his Sunday braai.

Some years later, my parents joined a church, beer and much else
forgone in their search for salvation or something similar. Living
on borrowed time now, he’d said. At 72, his borrowing stopped.

Point made, though I never bought the idea. With its blue tarnish
spreading like a slow bruise, the mug still stands on the dresser.
Unused. Unlike my father’s grave.

Our scars have the power to remind us
that the past was real.
– Ted Tally/Thomas Harris

As aides-memoire to our retreating past,
these hieroglyphs imposed upon the flesh
point the doubting Thomases in our midst
to palpable wounds, our history’s truth.
Inflicted by blunder or by circumstance,
illness or mishap, others or ourselves,
few were chosen; some quite deliberate.
We’re all veterans of life’s battlefields.
There are certain days when we’re less troubled
by their presence than by uncertainty
as memory’s details abscond or fade,
betraying stitch marks and the suture lines.
Scars, like photographs, prove that we’ve been there.
Those more painful hide far below the skin.

Singing long before dawn and well after dusk,
the Cape robin never reflects on dying;
might its voice become more sombre if it did?

What matins and vespers do we need to pray
to have that sense of oblivion ignored
for the sake of being simply so alive?