As we approach heritage day, Struik Lifestyle, a division of Penguin Random House South Africa, offers us a rare opportunity to look behind the façades of some of Pretoria’s significant heritage buildings, many of which are not open to the public. The text and images come from the publication Hidden Pretoria.

The architectural heritage of Pretoria embodies the interaction between people, place and politics that shaped the city over time within its particular historical and geographical context. Hidden Pretoria places the buildings of our capital city in the spotlight. Although Pretoria often receives less attention than Cape Town and Johannesburg, its architecture is equally remarkable and its history is central to the broader South African narrative. 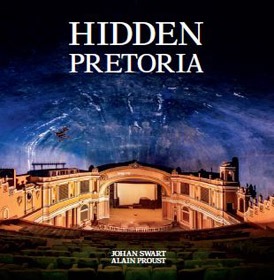 The Book
Despite being South Africa’s capital city, Pretoria has often played a supporting role to bold and brash Johannesburg and Cape Town’s cosmopolitan charms. However, when it comes to architectural heritage, the Jacaranda City is well-endowed. From the skyline-dominating Union Buildings and Voortrekker Monument to the imposing edifices of its administrative precincts, Pretoria might be deserving of a second moniker: the city of sandstone, brick and granite. But when you look beyond the impressive façades, soaring columns and linear planes of buildings that were intended to convey power and authority, you’ll find light-filled interiors embellished with decorative touches that are only hinted at from the outside. Murals, mosaics, domes, galleries, stained-glass windows, gleaming brass and impressive woodwork are often hidden from view behind doors that are closed to the public. And even those museums, buildings and places of worship that are open to all have architectural and design features that are easily overlooked. The history of the city, and of the country, has been played out in many of the buildings featured in Hidden Pretoria. This book captures remnants of our diverse heritage so that a new generation might recognise the need to embrace the past in order to build our shared future. 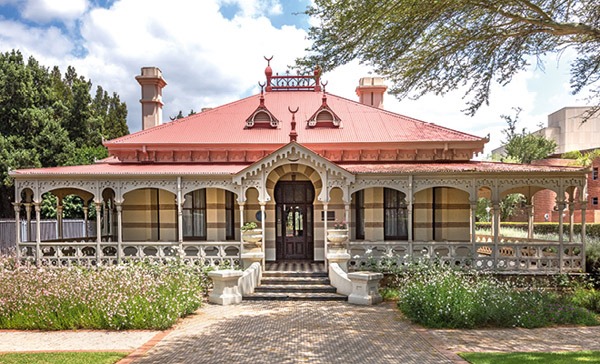 Situated at the Roper Street entrance, Kya Rosa is a 1980s reconstruction of the original 1890s inner-city building that hosted the university’s early activities. The Victorian ornamentation of the building displays hints of Orientalism.

The Author
Johan Swart holds a master’s degree in architecture and heritage studies. He is a full-time lecturer at the University of Pretoria, where he teaches architectural history and leads a heritage-focused design studio for postgraduate students. As curator of the architecture archives at the university, he is responsible for the safeguarding and interpretation of significant historical drawing collections. Johan writes about architectural history with a specific interest in the interpretation of archives. In this capacity, he shares information on South African architecture through local and international research projects, public exhibitions and online articles. He is pursuing doctoral studies in the field of cultural heritage. 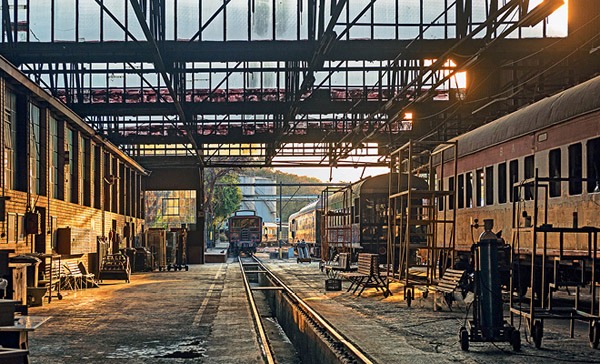 The Photographer
Alain Proust is one of South Africa’s foremost photographers. In a career spanning many decades, his work has included architecture and the built environment, interior design, art and artists, landscapes and nature, food and beverages, and in-studio advertising stills. Alain was the photographer for Hidden Cape Town and Hidden Johannesburg, both published by Struik Lifestyle, and he brings the same creative vision and eye for detail to Hidden Pretoria.

CAPITOL THEATRE, Pretoria’s most unexpected interior space: Visitors entering the Capitol Theatre today are first surprised by an incredible volume hidden behind the nondescript exterior, then by the realization that this theatre of erstwhile glory now fulfils one of the most mundane of urban functions: parking. Originally intended as a complete escape from the realities of city life, the building retains a quality of otherworldliness, but its decay is also tragically and tangibly evident. (The cover image shows the interior of the Capitol Theatre.)

The Capitol was developed by African Theatres Limited and opened to the public in 1931, during the interwar era when entertainment facilities were a social necessity and American-inspired theatres were a profitable business. In the tradition of atmospheric theatres at the time, the 2500-seat Capitol transported its audience to the Italian Renaissance and entertained them with cinema, dramatic performances, and music by organ or orchestra. The Capitol was the second atmospheric theatre in South Africa after the Alhambra in Cape Town, long since demolished. Many of Pretoria’s current theatres were only built in the second half of the 20th century. Although an opera house (of which only the Pretorius Street façade remains) existed when the Capitol was built, entertainment options in the city were significantly expanded by the Capitol, and it played an important part in Pretoria’s social and cultural life for decades to follow. 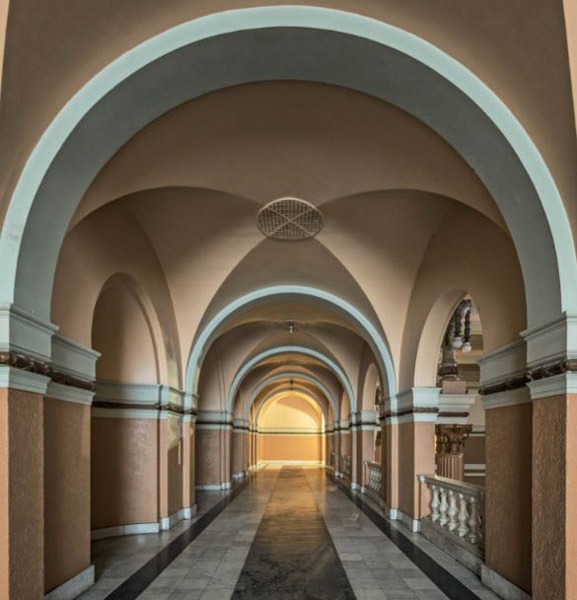 The upper circulation passages surrounding the grand foyer, with openings to the left leading to the gallery seating. The groin-vaulted arcade here is starkly detailed compared to the exuberance of the adjacent spaces.

Positioned adjacent to the Old Netherlands Bank on the southwestern edge of Church Square, the Capitol was built where the old President Theatre used to stand. Later known as the Empress Theatre or Her Majesty’s, the President Theatre occupied a building previously used by the old South African Hotel and Reck’s Tavern. The Capitol was part of a new masterplan for this site, with the auditorium placed deep into the block, a second wing with entrance foyers reaching towards Parliament Street, and a multi-storey hotel to be placed along the street edge. The hotel was never built, which left the simple box structure of the auditorium volume unfinished and exposed, in contrast to its highly ornate interior.

The buildings, designed by architect Percy Rogers Cooke with John Ralston, were detailed to the highest standards of ventilation, acoustics and lighting that permitted controlled conditions, including simulations of day or night skies, within the auditorium. A significant aspect of the design is the interior scenography, designed by Hungarian artist Sandor Konya who had completed important set design projects internationally before moving to South Africa. Konya’s son, Allan, later became an architect in Pretoria; the Hammanskraal Seminary, designed by him, is a beautiful architectural ensemble.

Most of the city block around the Capitol was redeveloped as the Transvaal Provincial Headquarters in the 1960s, and in the 1970s there were further proposals to replace a series of buildings along the western façade of Church Square with high-rise towers for government departments. Although the demolitions were prevented by public debate and heritage activism, the Capitol had already been acquired by the state. Since then, it has been used as ancillary parking for government departments. There have been various proposals for the theatre in recent years, portions of the foyers were restored by action groups, and art collaboratives have expressed interest. But as it stands there is no proposal in place and the interiors are gradually deteriorating.

The fragments of fantasy visible at the Capitol bring to mind contemporary casinos and theme parks. Perhaps the Capitol could again play a role in entertainment, or be reused for a more pragmatic purpose. In the meantime, those who park their cars on the asphalt surface under the atmospheric ceiling should enjoy the view on our behalf. 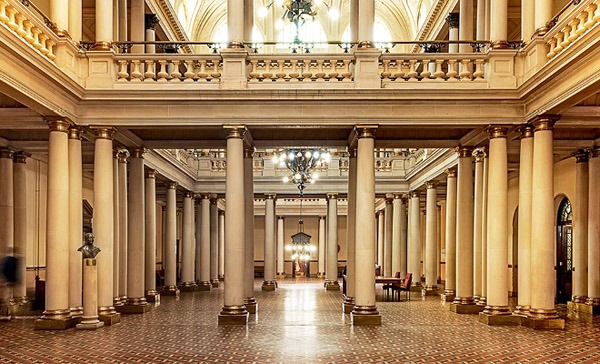 Palace of Justice - The colonnaded entrance halls are flooded with natural light from leaded-glass skylights and clerestory windows. A series of double-volume public spaces lead into adjacent courtrooms. 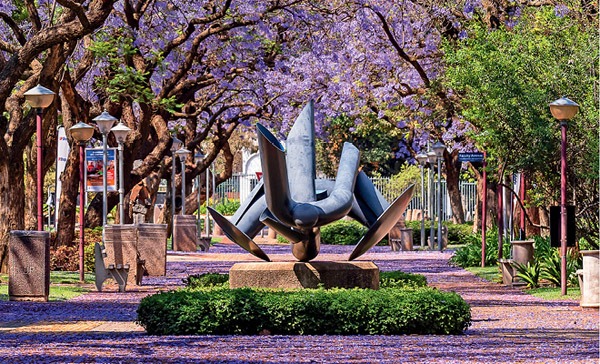 A route leading to the new Law Building showcases the best of the Hatfield Campus: a landscape atmosphere, jacaranda trees in bloom, and one of the many sculptures by Edoardo Villa. 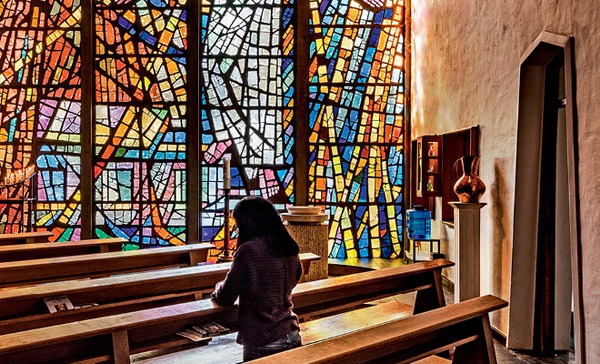 At Christ the King Catholic Church, this dalle de verre installation, entitled The Resurrection, shows Leo Theron’s work at its best. The luminous artwork is made of cut slabs of stained glass set in reinforced concrete. 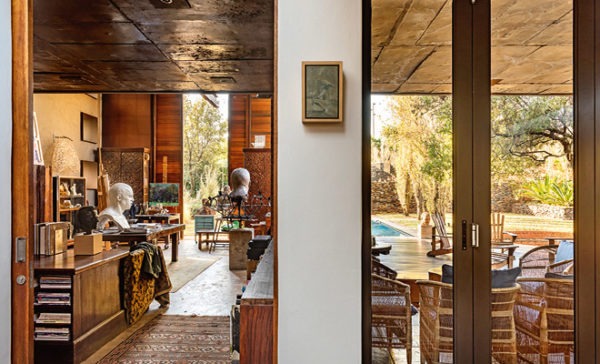 Contemporary Artists’ Spaces - The studio space at Angus Taylor and Rina Stutzer’s house is filled with many of their own works. Large sliding doors facilitate a close connection between the inside spaces, outdoor social areas, and the indigenous gardens in the background. 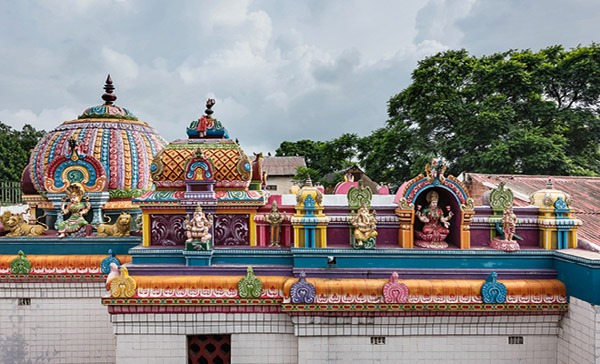 Mariamman Temple - The temple roof is covered in brightly coloured decorative elements. The larger onion-shaped dome covers the cella (sanctuary) while two smaller domes are positioned over the shrines within the arda mandapam.