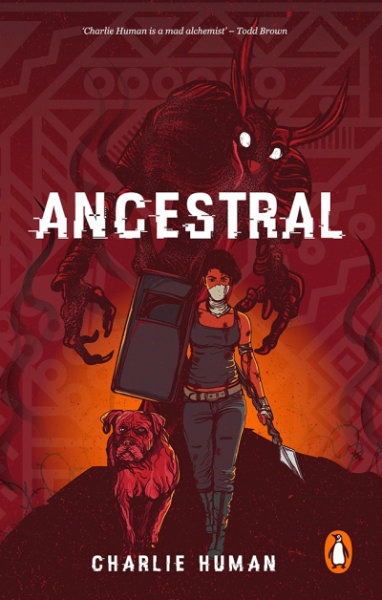 Ancestral is a story that straddles the borders of the dystopian, fantasy and sci-fi genres. The protagonist, Clementine “Clem” Khoza, is a woman hardened by a childhood of stick fighting and an adult life spent in war, law enforcement and the struggles of addiction. Now, she faces her toughest challenge yet. Her son, Drew, has been kidnapped and taken into the heart of Welcome Shade, a luxurious retirement village turned to ruins by a raging gang war. Clem enters the gates armed with an iron-tipped staff and a riot shield. A street child she calls Brak barters his services as a drone pilot, navigating and scouting for enemies, in exchange for the safe return of his sister, who was also taken into the deadly labyrinth. Clem is focused and determined, but she is followed by memories of her past and a hallucination that she argues with on occasion. The closer she gets to finding Drew, the more complicated things become.

As I read this book, I found that the main antagonist’s motives weren’t the clearest. Strangely, the more that is revealed about him, the less convincing his motivation seems. I think a simpler origin and motive could have left room for his actions and words in the unfolding plot to make him more interesting. Fortunately, the villain’s lacklustre personality did not diminish the importance of Clem’s mission to rescue her child, and the story could continue unabated.

Charlie Human demonstrates a wealth of imagination and creativity in Ancestral. While the fictional retirement village is set in Cape Town, the author clearly started from the ground up when creating the world for his story. He paints descriptive pictures from the perspective of the main character. I enjoyed reading about the different people who were fighting to survive, or scratching a living out of the trash and ruins after the ultra-rich were driven out. Welcome Shade is a bubble of dystopian brutality in the shadow of Table Mountain, and it all reads as vividly as if it were a graphic novel.

Some of the details and twists towards the end did put a strain on my suspension of disbelief. It can be perilous to introduce new fantasy or sci-fi elements at a time when the boundaries of the world appear to be well established, because a reader needs to readjust their views on what is possible and impossible in the fictional world.

Clem comes across as the cynical battle-worn type, who takes pride in the grit that trauma has sown in her. She even calls Brak “kid” the way a typical tough-guy anti-hero in American movies would. The rugged protagonist who fights alone is a trope that Human must have leaned into when writing her. Because he didn’t try to hide it, Clem feels genuine. She expresses her dry sense of humour now and then, and her narration sometimes pauses on details outside of a fight. For some readers, this would be a welcome respite from the intensity. Others will not appreciate a break in the action. There was only one significant scene in which Clem experienced a more primal fear. It happened when a huge dog was sent after her. I would have been interested to get a bigger picture of why this frightened her more than any soldier or mercenary with a gun.

We are introduced to more minor characters as the story progresses. Clem discovers a bond with one of them. Their thoughts and feelings about each other are kept vague, but to me this came off as the fleeting shadow of a romantic subplot. It came at a point when I was beginning to believe that I could read a young adult novel with a female protagonist who didn’t have eyes for anyone except her missing child. Having that hope crushed was not something I appreciated.

I did appreciate how strongly Human conveyed Clem’s extensive fighting experience. In the acknowledgements, he says that Ancestral is a martial arts book, and it shows. There are plenty of fight scenes. The battles are impressively detailed, and sometimes shocking or gross. I think this is one of the book’s strongest points. The violence is completely unfiltered, with everything from a simple jab to the crunch of a bone breaking. The further one reads, the easier it is to inherit Clem’s insensitivity to the bloodshed. The detailed battle scenes can leave the reader almost as tired as the protagonist.

Human sustains the tone, atmosphere and tension needed to hold one’s attention, and he does it well. I would recommend Ancestral to readers with a taste for dystopia and fantasy. They should have stamina to keep up during the fights and imagination to appreciate the diverse world Human has crafted. The plot does not drag in any sense, and if you enjoy the brawls, you won’t want to put it down.