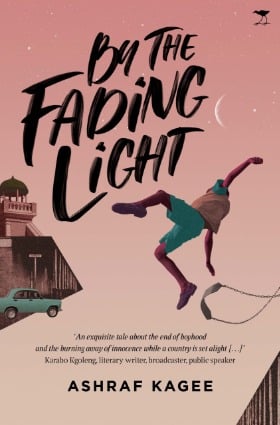 Ashraf Kagee’s first novel, Kahlil’s journey (Jacana Media, 2012), won the European Union Literary Award. Having set the bar high with his debut, Kagee does not disappoint with his second book, By the fading light (Jacana Media, 2021). In a book with an unforgettable sense of place, time and age, the reader is carried away to the travails, thoughts and fears of three boys, Ainey, Haroun and Cassius, 11 going on 12, growing up in the 1960s in Salt River, a neighbourhood in Cape Town adjacent to Woodstock, close to District Six, with the harbour just down the road.

In his Greek grammar (Harvard University Press, 1920), HW Smyth explains some of the rhetorical figures identified by the ancient Greeks (they were, of course, students par excellence of language, style, rhetoric and ideas). Among them is the rhetorical figure of litotes. Smyth defines litotes as “an understatement so as to intensify; affirmation expressed by the negative of the contrary”. For example, Homer describes Achilles as “neither unthinking, nor unseeing” (IIiad, line 186). The Oxford English Dictionary defines it similarly, adding that it often incorporates double negatives for effect. By the fading light abounds with examples of litotes. How delightful! The author’s wry sense of humour and the striking use of litotes elicit a chuckle, only for the reader to realise it is ’n lag met ’n traan. A few examples: Cordelia’s white accent deserts her “on the occasions when she needed to berate her brother, which were not infrequent”. Although Kulsum expected Haroun to meet her level of distress, “it was not a sentiment he necessarily shared”. Ainey does not (yet) share the Lites’ “not-insubstantial interest in the opposite sex – represented by Ingoo, Bingoo and Mingoo Hassim”. Those among the Klopse “unpossessed of musical talent” simply waved their hands and arms. “[T]hey weren’t exactly livewire conversationalists, were they?” They “allowed Mrs Shaanti’s wig to go unsnatched”.

Another rhetorical figure to be found in abundance in the book is the mixing of registers. Mundane matters are discussed in a high register of language. It reminds of Michiel Heyns, writing with his tongue deep in his cheek in Reluctant passenger about the doings of baboons, using highfalutin Shakespearean and Henry Jamesian expressions. In By the fading light, Haroun suffers in silence, observing “his mother’s abundant hirsutism”. The feared but clumsy teacher, Mr Hicknekar, and the principal “were for once united in common cause to make the wayward street musicians cease and desist their unmelodious activities”.

Kagee uses hilariously funny expressions and descriptions. A few examples: “fellow puffers-in-crime”; “harasser-in-chief”; “a family elder of the female persuasion”; “sauntered about with a jaunty stride”; “Mr Hassim, a no-nonsense kierie-wielding shopkeeper would have none of it”; “‘voetsek’ came out as ‘poorr-chack’”; Haroun wishes he can “place himself before the woman of his dreams under more manly and less mucosal circumstances”; “just the mention of it (one’s mother’s waheena), never mind the said parts engaging in any particular activity constituted grounds for a fight”; “propensity for peculiar behaviour”; “off-key doo-wap warbling”; and “the state of Two’s clock weights” after his row with his brother known as One. The piece on the family with their three boys all called Yusuf is a jewel. It could be a stand-alone short story. There are many other such jewels in the book.

The book is funny, indeed, and a marvel in the expert use of language. But it is heartbreakingly sad. In the voice of the narrator:

However, fate had intervened and alternate life trajectories had unfolded for our noble trio. Their could-haves and would-haves and if onlys remained what they were: counterfactual possibilities that existed only in their respective imaginations, far from the reality of the present.

The story is both humorous and heartbreaking, ’n knop in die keel wat weggesluk word terwyl mens vir ’n oomblik eers moet ophou lees en in die verte staar – yet, in the end, uplifting. Despite their circumstances, the boys retained an unfazed and feisty sense of boyhood: inquisitive, naughty, wide-eyed about a world opening up, experimenting, discovering, living in the liminal world between little boy and big boy (teen), with a daring underestimation of and healthy disregard for the strange, incomprehensible world of adults, reminding one of Calvin & Hobbs. It is so terribly sad: Ainey, Cassim, Haroun – none of them wanted, none of them accepted. A symbol of the people of Salt River – not wanted by the authorities and the political system of the time. Eina, eina, eina.

The dense writing in the book calls for every sentence to be savoured, pencil in hand. There is lots of detail, food, music, films, customs and so much more. Dana Snymanesque. Although By the fading light consists of lots of telling and not much showing (in particular, in the first part of the book when the scene is set), it is expertly done. One is carried away to another world. There are allusions to Bombay, Mombasa, Turks, Rajwadi and other faraway places, cultures and distant times. It is familiar (dit is hier innie Kaap!) and yet so foreign, at least to someone like this reader, who also grew up in the 1960s but in a very different environment, in a privileged Afrikaner community in Pretoria.

The telling in By the fading light is nuanced. The teacher Mr Hicknekar (“small of build, short of temper and round of belly”) seldom undid “Mr Fixit” (his name for his small cane) from the string attaching it to the ceiling in the middle of the classroom. Certainly no angel, he is also not depicted as a one-dimensional wreedaard, the stereotypical school teacher of the time. Officer Fourie is not simply a heartless, brute killer at Sharpeville, but a frightened, traumatised, young Afrikaner obeying the instructions of the panicking lead officer. I was wondering, however: with Fourie in his sixties when working in Salt River in the early 1960s, which is when he appears in the story of “our noble trio”, he must have been in his sixties at Sharpeville – thus not a young Afrikaner policeman at Sharpeville, but rather, by then, already an older policeman who had seen too much and who had fled Kaap toe after Sharpeville.

It is no mean feat to (re)create with such authenticity the world and the imagination of a child (and avoid the trap of transposing the voice of the adult narrator into the words and thoughts of an 11-year-old child). The Dutch author Maarten ’t Hart (Een vlucht regenwulpen, 1978; Het roer kan nog zesmaal om, 1984) did it masterfully, writing about his childhood in the 1950s in the blue collar village of Maassluis near Rotterdam, the harbour city on the Rhine. Running in one’s mind in the company of “our noble trio” through the streets of Salt River reminded this reader of running along with ’t Hart in the cobble stone streets of Maassluis in the 1950s. Whereas Maassluis is a homogenous, blue collar town of fishermen and harbour labourers, many of them strict Calvinist Christians, Salt River is a colourful, diverse community, with the sad legacy that many are the descendants of slaves forcefully taken from their various homelands centuries ago. The imaginary flashbacks of Ainey, Cassius and Haroun to those abductions while they have tea with sis Ghava – without saying a word – are one of the many great highlights of the book. Has the history of Salt River been written yet?

The book also leaves us, again, deeply under the impression of the lasting effects of the abuse of power of sexual violence perpetrated against a young child, and how such a child, damaged forever, can end up as an adult wearing the Mickey Mouse watch of his victim – a visible, desperate cry for help, love and care.

By the fading light is a book to be read and reread. To remind us of where we were as a country. To savour the language. To laugh. But mostly to stare misty-eyed into the distance.