Comment on this interview and stand a chance to win a copy of her latest anthology The Tempest Prognosticator (2011)! The most original comment wins. 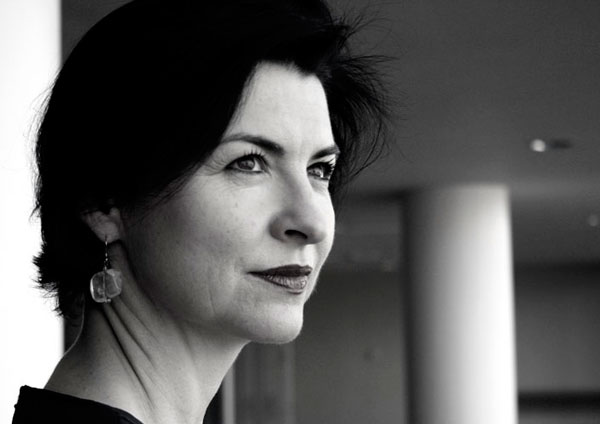 Your 2007 collection A Fold in the Map deals with the idea of place, of belonging and alienation and has been described as being something between a travel book and a personal history. Half of the book (before the metaphorical fold) can be described as an observation of South Africa from the distance of England and Scotland. The second part is set largely in Graaff-Reinet, the Karoo town where you grew up. 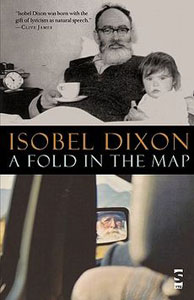 How has the idea of place and displacement, of town and city, influenced your work? Is your poetry an attempt to bridge the different continents where you have lived?

I feel deeply rooted in the Eastern Cape, both in the Karoo and also further east to Mthatha where I was born. But I also love to travel. Place permeates everything anyway, whether you are a writer or not. As Ovid says (Letters from the Black Sea)…

Our native soil draws all of us, by I know not
what sweetness, and never allows us to forget.
Where’s better than Rome? Where’s worse than cold Scythia?
Yet the homesick barbarian will still flee the City...

and I guess I am always a bit of a homesick barbarian, fleeing to and fro, from city to home town, London and the Karoo.

Living abroad may be part of the reason that there is a strong sense of landscape and location in many of my poems. The way, when you’re somewhere else, you look back in sharper focus at places you have left. Distance and the desire to retrace experience, map things in a new way.

The second half of A Fold in the Map deals with my father’s death. I think the death of a parent is always a deep, painful, primeval thing, no matter what kind of relationship you had. A place you can’t return to, ever. And maybe writing about it is a way of trying to bridge some of that gap, to understand and reconnect in some way, with a place or person you have lost. Poetry may be about bridging all kinds of gaps. 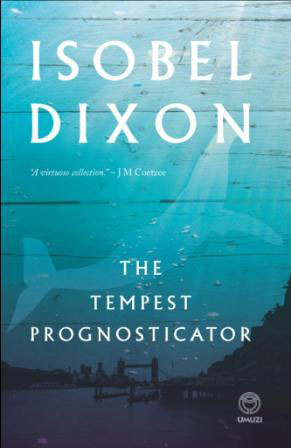 In The Tempest Prognosticator a number of fascinating creatures leap from the page. Different geographical locations – from Cape Town, Nagasaki and Congo to the Karoo – feature, and historical figures like Robert Byron, Mary Kingsley and the poet and scientist Eugène Marais make their appearance. Tell us about the influence of travel, especially to Africa, on the poems in this book.

My four sisters and I grew up in Graaff-Reinet, but every holiday we went to my uncle’s farm near Hogsback, spending many of our days in the veld. He loved animals and the land, and we learned a great deal about nature first hand, though he was a stern taskmaster. (A bit of a legend in our family, he features in a few poems too.) While A Fold in the Map as a collection was more about family, I’ve always written about animals and it was fun to give my fascination with the creaturely freer rein in The Tempest Prognosticator (where the title poem is about weather-predicting slugs – true story!). The nature writing of Eugène Marais has also always struck a chord, so two poems, “The Inopportune Baboon” and “Toktokkie”, are a bit of a homage to him.

Before Notting Hill’s iconic Travel Bookshop closed down, I was one of three “poets in residence” – we didn’t actually stay in the shop (though I’d have been more than happy to trawl those shelves all night ...), but we each 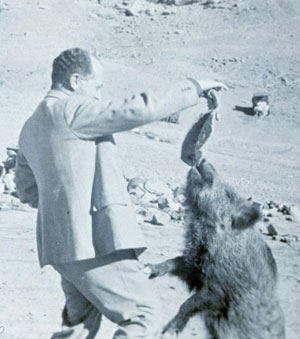 did a couple of days’ work there, then wrote new poems inspired by the experience. To start with, a postcard using an old image was the source for “Postcard from the Colonies”. I’m a great admirer of feisty Victorian explorer Mary Kingsley and her brilliant travel writing (her Travels in West Africa is a real treat) and I raided her work for “Beetle, Fish & Fetish” (her key reasons for exploring Africa, she said). An irresistible anecdote from Robert Byron’s The Road to Oxiana inspired “The Poor Wild Boar Who Went Too Far”.Though my poem refers to Byron’s archaeologist friend Herzfeld and his pet porcupine, and to a different boar, I was amused to stumble on this photo recently, and this one of Robert Byron with another porcine fellow.

Just before I left home in Cambridge for South Africa on this trip, my copy of the beautiful poetry journal The Dark Horse arrived, and with it an intriguing interview by Christian McEwen with Welsh poet Gwyneth Lewis. She summed up how I feel about travel with this: “Travel’s always a vocabulary adventure for a poet. What is that thing there? Oh, sassafras, I like that.”

You have taken part in a number of multi-media productions where poetic texts are accompanied by art and music. Even though I (regrettably) have not yet attended any of these events, I’m referring to Psycho Poetica in 2010 and The Debris Field with its premier in 2012. Can you tell a little bit more about these collaborations with other artists, musicians and poets? 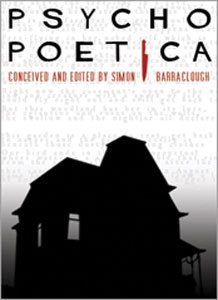 I really enjoy the way collaborative work stretches you in different directions, and I appreciate the focus and the deadlines that come with working with other people too. In the beginning collaborations sprang out of organising poetry events with poet friends and fellow workshoppers, and things have developed organically from there to take in film, visual arts, music. I feel very lucky to be able to play this way, with such talented people.

Psycho Poetica was organised by Simon Barraclough, who chose twelve poets to create a “faithful distortion” (his words) of Hitchcock’s Psycho for the film’s 50th anniversary in 2010. Oli Barret composed a glorious Bernard Hermann-esque score which, when possible, has been performed live with the poets. The show with a full cast of poets was performed several times after premiering at the British Film Institute, but I’ve also taken part in a three-performer version with Simon and Joe Dunthorne which featured at the StAnza and Page to Screen festivals. I have two poems in the anthology published by Sidekick Books – both responding to the penultimate scene of the movie, the dramatic reveal, but one poem is an “alternative  take” with no “spoiler” for any readers who haven’t yet seen the film. If you haven’t, I strongly recommend you get the DVD!

Film is an enduring interest, and for Steven Fowler’s performance series Comrade Simon and I wrote a sequence called Much Ado About Marnie, which is both a celebration of collaboration itself and a homage to some famous film-making duos (Alfred Hitchcock and his wife and creative 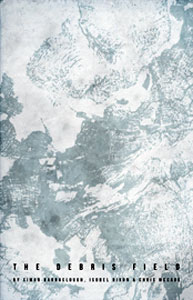 collaborator Alma Reville; Martin Scorsese and his editor Thelma Schoonmaker; and Emeric Pressburger and Robert Powell – who was also married to Thelma).

The Debris Field was a jointly written performance with Simon Barraclough and Chris McCabe, with music by composer Oli Barrett and film by Jack Wake-Walker. We premiered it on the 100th anniversary of the sinking of RMS Titanic, 14 April 2012.

There’s more about the show on The Debris Field site and in a piece I wrote for The Island Review. The Debris Field is also published in a beautiful slim volume by Sidekick Books. Earlier this year I wrote a sequence called Doppelgänger (now made into a short film by Jack Wake-Walker) for a project with Italian composer Roberto Rusconi linked to Schubert’s Der Doppelgänger. The next phase of our collaboration is currently challenging me – this time the theme is dark matter, and Schubert’s Der Erlkönig features …

Another ongoing project close to my heart is a fusion of my love of travel, nature, creatures – a response to DH Lawrence’s Birds, Beasts and Flowers, with Scottish artist Douglas Robertson. Sometimes I am responding to Doug’s notebooks, sometimes he is responding to my poem drafts, sometimes we work independently towards and/or away from (or in some cases against) one of DHL’s poems. It’s a long-range project, which involves not just Doug’s beautiful illustrations, but also animations and carved and constructed objects. We’re aiming for an exhibition in late 2014 and publication after. 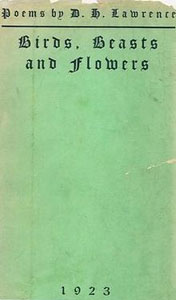 What is the influence of new technology and the culture where one medium is mediated by another in an endless plethora of forms (with the internet as an example) on literature in general?

In my work as a literary agent, new media formats present constant challenges in termsof ensuring that creators get their rightful revenue, but it’s an exciting time, rich in possibility. I’ll be discussing this in more detail with industry folk at Birkbeck’s University’s Arts Week in London on 22 May.

It’s the subject of many separate essays! For me as a poet, similarly, there are lots of opportunities now that it’s so much easier to create and manage your own website, make audio recordings and films of readings, and take part in the kind of collaborations I’ve been describing. Recently I’ve been seeing the rise of more festivals featuring poetry and film.

You’re both a poet and a literary agent, representing other people’s work in a competitive market. What is it like managing these two sides of your life?

I often get asked this as though it’s somehow a strange thing, but for me it feels mostly seamless. I love representing the work of writers whose work I admire, and they’re a damn good inspiration too.  I see how hard they work at their writing, and they know I also understand some of the issues from their side. Most writers need a “day job”, of course – TS Eliot was a banker, William Carlos Williams a doctor, and many poets I know are teachers, either freelance or at universities. I’m looking forward to my event with Joan Hambidge at the Franschhoek Literary Festival (Sunday, 11h30 in the Screening Room) and hearing how she juggles her own academic career and role as a critic with her poetry. And also more about the themes of film and travel in her work.

Do you have any advice for developing writers? What is very important to keep in mind as a writer?

My key advice is always to read a lot and as widely as possible. Keep a notebook (in whatever media format you like, but I’m obsessive about always having a pen on me, something not battery dependent …!). Keep writing and trying to hone your craft. Look for a good workshop class or mentor: if you’re serious about your work it’s a worthwhile investment of time and money. Make time for writing and guard it jealously, also from the peril of getting too hung up on social media.

• Do not miss Isobel Dixon’s literary talk with Joan Hambidge at the Franschhoek Literary Festival on Sunday, 19 May. It starts at 11h30 in the Screening Room.

• Read two new poems on LitNet by Dixon, never published elsewhere before, from the Birds, Beasts and Flowers project: 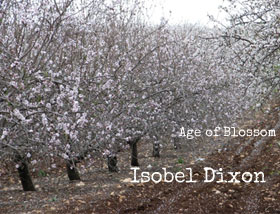 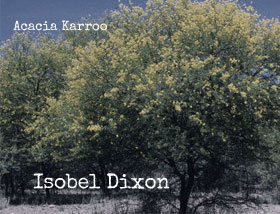