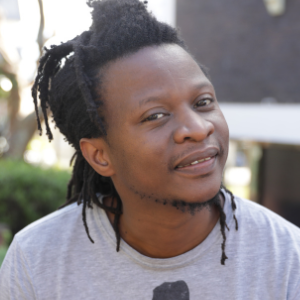 Xolisa Ngubelanga is a stage lecturer at AFDA in Gqeberha. He holds a master’s in creative Writing from Rhodes University, Makhanda. He has written plays like FlameBOOK, It’s My Baby and Dinner with Bantu and has won a number of awards in South Africa. FlameBOOK won the 2017 Standard Bank Ovation Award at The National Arts Festival and It’s My Baby completed a run in September 2021 at ArtsCape in Cape Town.

In 2015 Xolisa was invited to the Blantyre Arts Festival in Malawi to workshop Malawian theatre makers in writing and directing. In 2017 he returned to work with Malawian actors in the production Taking Madiba. In 2019 he worked in Tsumkwe, Namibia near the Kalahari Desert with local villagers, creating a script in a multitude of Northern Namibian Khoisan languages.

Xolisa accredits his knowledge and approach to theatre to members of The Serpent Players, a protest theatre group that was founded in the 1960’s in New Brighton township during apartheid. Their stories and wisdom, in particular mam’ Nomhle Nkonyeni’s, has moulded him to become a bold writer and unapologetic in telling the people’s story.

In Xolisa Ngubelanga’s Siwagawula siwarhuqa, a woman recounts how, as a school girl, she fell in love with a handsome gardener, Sakhumzi, and how the experience left her hands covered with thorns. Zikhona Jacobs performs the monologue, directed by Mfundo Zono. English subtitles. Stemme | Voices | Amazwi is LitNet’s series of 15 short, powerful monologues presented in collaboration with Suidoosterfees, NATi and ATKV.