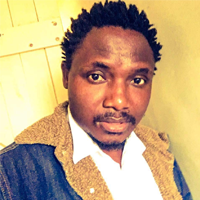 Tanaka Chidora is a poet, literary critic and academic who teaches creative writing and theories of literature in the Department of English at the University of Zimbabwe. He researches mainly Zimbabwean literature, popular culture, diasporic literature and postcolonial theory and thought. His 2018 doctoral thesis, titled Out of crisis: Discourses of enabling and disabling space in post-2000 Zimbabwean literary texts in English, focuses on what it means to circulate in a world that is ostensibly global, but in which issues of who “we” are remain at the fore. His first poetry anthology is titled Because sadness is beautiful? (2020) and is his way of giving to sadness a gentle thrill. Tanaka is also working on his first novel, which is an autofictional narrative of his growing up in one of Harare’s ghettoes.

"I remember writing about Grandmother and Grandfather in one of my poems in Because sadness is beautiful?. The two loved dancing. The dancing started with casual humming of a traditional tune soon after supper. The dancing would go on late into the night, so late that it would take the first cock’s crow to remind us that it was time to sleep."