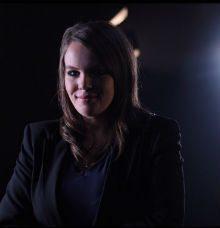 Melissa holds a BA degree in media communication and culture, and an MA degree in contemporary/film studies (both from NMU). She focused specifically on film theory in her final year of study, in particular feminist representations in film. Previously, Melissa worked as a producer for the Eastern Cape’s community television station Bay TV, creating and overseeing a daily children’s programme. Melissa has been working at AFDA Port Elizabeth since its inception in 2015, and specialises in screenwriting. In addition to heading up the AFDA PE Film School, she is also in the process of completing a doctoral degree in media studies, looking specifically at how grief is represented in film. Melissa loves music, houseplants and cats.

“A fleeting stubbornness. She had always been reticent regarding her personal matters, and so did not enjoy the manner in which the Thought was prying.”