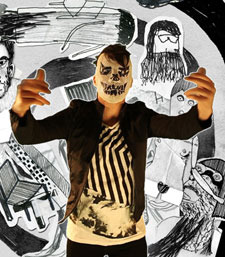 Jax Panik started as a parody of sorts. Founding members Jacobus van Heerden and Johnny de Ridder (Cape Town-based music producers) initially set out to create a mock pop star / pop group, combining catchy music with bubblegum visuals and videos. The idea was largely in reaction to the traditional rock band paradigm that dominated South African music at the time. From the onset Jax Panik sought to do things differently – initially refusing to play live, distributing his music online only, extensively making use of fan-generated content and embracing new media and social networking in promoting himself.

By 2006 Johnny was well known locally for his role in Fokofpolisiekar, a controversial punk-rock band. Jacobus had recently completed a degree in visual communication and worked as a copywriter and illustrator while producing music on the side. The two, who had been friends since school, started Soft Light City at the end of that year, producing original music for TV commercials. Jax Panik, among a number of sideline ventures, became the duo’s escape from often mundane and routine corporate work.

Jax Panik’s first album, Cigarettes & Cinnamon, completed in 2007 and released independently in South Africa in 2008, featured a collection of synthesised pop-rock tracks. Lyrically the album was self-reflective and personal, but musically and visually spoke in no uncertain terms to the masses. The whole record followed a typical verse-chorus pop blueprint, loaded with oohs, aahs, and words like baby. Early critics failed to see the tongue-in-cheek nature of the music, often writing it off as being too repetitive and too predictable. Nevertheless, tracks like “Cigarettes & Cinnamon”, “Russian Roulette” and “Hit or Miss” enjoyed high rotation on regional and campus stations in South Africa throughout 2008, reaching poll positions on some of the country’s most popular radio charts. (Other noteworthy achievements during this period included an MTV Africa Viewer’s Choice Award nomination).

Role-playing became a clear theme around the Cigarettes & Cinnamon album, with early videos, photos and live happenings all featuring strange outfits, masks, and generally absurd behaviour. Fans were encouraged to create their own Jax Panik content. The results were often used as official videos. Fans were also incorporated in live performances, and in rare instances even stood in for interviews.

But the communal dimension of Jax Panik went largely unnoticed by the general South African public. Local media continued to pinpoint Jacobus van Heerden as being Jax Panik. Jacobus, being the voice of the project and having acted in a number of his own viral videos, enjoyed adding to the confusion. But fans and close followers got the full picture and understood Jax Panik to be a third person – one with many faces and disguises.

This concept was taken a step further with the release of I am Jax Panik in 2010, the duo’s second full-length studio album. Jacobus van Heerden remains the dominant voice here, but the album also features a host of unusual collaborations with local singers and musicians, furthering the concept of Jax Panik as a hybrid identity. Sonically the record shows off the group’s production and writing skills, as big hooks and melodies collide with a plethora of synthesised sounds and homemade samples. A range of previously unexplored genres are combined, from mainstream pop, to hard rock, to electro. Jacobus and Johnny have dubbed the new sound Hyper Pop.

Visually a clear theme, or “corporate identity”, was developed around I am Jax Panik. In interviews, videos, etc. Jax sports fashionable black-and-white clothing and an accompanying hockey-style mask, which echoes the striking black-and-white skeleton-like logo featured on the album’s cover.

This theme continues to act as a template or guideline for fans to generate their own content. Followers are encouraged to develop the story of Jax Panik in real time by contributing to daily discussions and/or submitting their own “I am Jax Panik” videos, photos, or stories. The “I am Jax Panik” experience can be likened to a social tribe or subculture of sorts, currently playing out predominantly online via the Jax Panik blog, Facebook, Twitter, and YouTube pages.

Sing ’it interview with Jax Panik