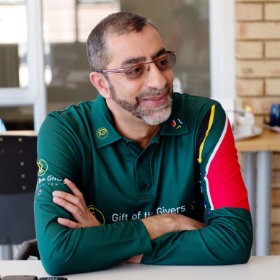 He attended Sastri College in Durban and matriculated in 1978, going on to study medicine at the University of KwaZulu-Natal's Medical School, qualifying as a medical doctor in 1984.

Sooliman commenced private practice in Pietermaritzburg in 1986, but closed his flourishing practice in mid-1994, choosing instead to focus his attention on Gift of the Givers Foundation, which he had founded in early August 1992. His establishment of Gift of the Givers was the consequence of a message he had received, when he was 30 years old, from Sufi Sheikh Muhammed Saffer Effendi al Jerrahi, his spiritual leader in Istanbul, Turkey, who called on him to serve all people of all races, of all religions, of all colours, of all classes, of all political affiliations and of any geographical location ... a calling he honoured then and continues to honour today.

His endeavours in this regard has seen Gift of the Givers emerge as one of the most respected humanitarian organisations in the world; today it is the largest disaster response agency of African origin anywhere on the continent.

Since 1992, Dr Sooliman has steered the organisation to many notable achievements and world firsts, including:

Reguit met Robinson: A Zoom conversation with Imtiaz Sooliman, founder of Gift of the Givers

Imtiaz Sooliman shares with Freek Robinson his late-night calls to get people out of hostage situations and evacuate them from countries under siege, and how, right now, he is involving foreign governments yet again to help South Africans under siege.