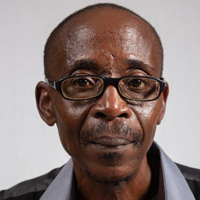 In 2011, he moved to Berlin under the DAAD artists in residency programme. He returned to Zimbabwe in 2014, where he has since been engaged in literary and cultural programmes. He is the director of LitFest Harare, an international literature festival.

Kwarantynketting: "Playing cat and mouse with anxiety" by Chirikure Chirikure

"But, as the week progressed, I began to realise that things were no longer the same." Writer Chirikure Chirikure tells more about Zimbabwe’s Covid-19 lockdown.