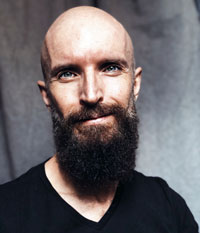 Charl-Johan studied musicology, drama and classical culture at the University of Stellenbosch, South Africa. He is currently the resident musical director for the Fugard Theatre in Cape Town. He has worked in Paris, San Francisco, New York, Hong Kong, Athens, New Zealand, China, Taiwan and Indonesia as composer, musical director, arranger, conductor, writer and performer. He has collaborated with many theatre greats such as playwrights Eve Ensler and Athol Fugard, musicians Vanessa Mae, Sibongile Khumalo and Loyiso Bala, and choreographers Gregory Maqoma and Veronica Paeper.

Charl-Johan has been nominated for 14 Naledi and 8 Fleur du Cap awards. He was musical director for the Fugard Theatre productions of The Rocky Horror Show, West Side Story and Orpheus in Africa, and supervisor/performer on Cabaret. He was also sound designer for the Fugard Theatre productions of Clybourne Park, The Father and The Painted Rocks of Revolver Creek for which he received a Fleur du Cap nomination.

He won best soundtrack at the Silwerskerm Festival 2016 for the feature Johnny is nie dood nie. He is the co-writer and composer of the feature film Kanarie, which premiered at Outfest in Los Angeles in July and will premiere in South Africa in October. Charl-Johan was the co-musical director of, and created additional music and arrangements for, the Fugard Theatre’s 2017 musical production of King Kong, for which he won both the Fleur du Cap and Naledi awards for his new compositions.

On the Emcee in Cabaret

Charl-Johan Lingenfelder, Naomi Meyer 2015-02-24 "He is omnipresent and to a large extent almost becomes the audience's conscience."