To be released on 21 January 2022 on the Vimeo account of Unusual Bones.: https://vimeo.com/unusualbones

Unusual Bones., in association with Couscous and Cream, presents an intricate short film, ekstasis, written and directed by Emilie Badenhorst and Kanya Viljoen, that explores the unravelling nature of intimacy through the eyes of two young South African women. The film stars the sensitive performances of Inez Robertson and Mariana Del Carmen in the leading roles, supported by veteran performers Grant Swanby and Ilse van Niekerk. The film was shot by an intimate group of filmmakers in the summer of 2019 in Cape Town city centre and along the west coast towards a local fisherman’s town, Velddrif.

The film is an exploration of a young woman that discovers love and intimacy, and the loss thereof, through a blossoming relationship with her best friend and the dissipation of her parents’ marriage. The 35 minute film uses the landscape of multilingualism in South Africa, the Afrikaner culture and LGBTQIA+ bodies to question the moments of existing in between these spaces and borders created within society. Both Badenhorst and Viljoen created this film as they wanted to explore the navigation of the young, female body in relation to identity and how this then navigates the familiarity felt and found in others. 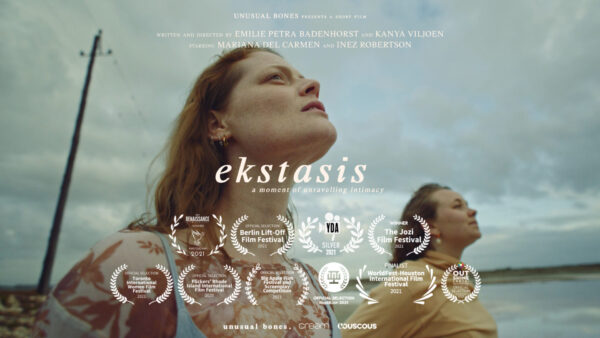 “As two emerging female writers and directors we knew that we wanted to create a film based on the landscape of multilingualism in South Africa, the Afrikaner culture and LGBTQIA+ bodies. We wanted the film to explore and question the concept of intimate relationships, including the difficulty of shifting boundaries and the honesty required of these relationships”. ‒ Kanya Viljoen, Emilie Badenhorst

The film was created following a collaborative process where many elements emerged through workshops between the writers, actors and the production team throughout filming. It set out to explore what could happen if certain spaces were left for creative input from all bodies on set, thus allowing an immediate truth to emerge within the story.

Unusual Bones. is a collective of creatives in Cape Town, that seeks to explore alternative and interdisciplinary ways of creating projects through a collaborative framework. The collective, founded by Kanya Viljoen and Emilie Badenhorst, seeks to question and explore the human spirit in South Africa. The vision of Unusual Bones. is to gently command a change in the social attitudes of South Africans through gutsy, honest, and excellent stories, amplifying the ‘othered’ voices in our local community. The collective carves out safe spaces for South African women to revive their creative expression in an industry that is often ruled by vertical hierarchies and ‘set methods’.