“When we carried out the fieldwork in 2011, we worked with two last speakers who had been discovered by the historian Mike Besten.”

On Wednesday, 27 March 2019 (13h00–15h00) at Stellenbosch University, linguist Menán du Plessis will talk about her book, Kora: A lost Khoisan Language of the early Cape and the Gariep (Unisa Press in collaboration with South African History Online, 2018). Read the press release here.

This year is the United Nations’s International Year of Indigenous Languages.

Menán van Heerden chats to Menán du Plessis about her book Kora: A lost Khoisan Language of the early Cape and the Gariep (Unisa Press in collaboration with South African History Online, 2018). 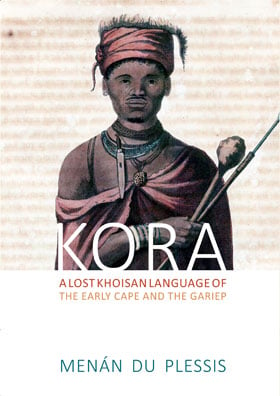 Menán, how would you define Kora, the language of the Korana people? Is Kora a variety of Khoekhoe? Where is/was it spoken?

Kora (or Koranataal) is a South African Khoisan language that belongs to the Khoekhoe branch of the Khoe family. It is closely related to, but is distinct in numerous respects from, other Khoekhoe varieties such as Nama, Dama and Giri (Xiri, or Griekwataal).

Some people prefer to describe the various Khoekhoe dialects as forming a continuum, or so-called dialect spectrum. This is a perfectly valid position.

At the same time, Kora was itself constituted by a number of dialects (one of them identified in the course of writing the book). Since speaker communities also had a strong sense of their own distinct political identity as Koranas, it seems fair to describe Kora as a separate language in its own right.

In its early guise as “Cape Khoekhoe”, Kora was originally spoken at the Cape, and later by Korana communities along the Gariep and in the interior of South Africa.

When speaking the language itself, the Korana people referred to themselves as !Orakua or !Orana. In other words, their own name for themselves (or their endonym) began with a click.

However, the naturalised Afrikaans and English version Kora, or Korana, was established more than two centuries ago, and it would be an affectation to use the click form now in an English or Afrikaans context.

“Kora (or Koranataal) is a South African Khoisan language that belongs to the Khoekhoe branch of the Khoe family.”

As for the term Khoisan, there are a number of misconceptions about it, and some people even believe it is meaningless! It has, in fact, a well-established and clearly defined meaning, and has been widely used by linguists for several decades as an umbrella term for those click languages of southern Africa that do not obviously belong to any other family. It is used, in other words, to refer collectively to the Khoe, Ju and Tuu families – without any implication of any relationship between them.

Are there any speakers of Kora left? Did you voice-record or video-record any Kora people speaking the language?

When we carried out the fieldwork in 2011, we worked with two last speakers who had been discovered by the historian Mike Besten. These two speakers did not know each other, and lived 200 km apart: one in Bloemfontein, and one in Bloemhof. Both were elderly and frail, and both died only two years later. We were aware at the time of a third speaker, who was reported to have retained a good knowledge of the language, but who declined to work with linguists. I have heard that this speaker is now working independently on a dictionary, which is wonderful news. 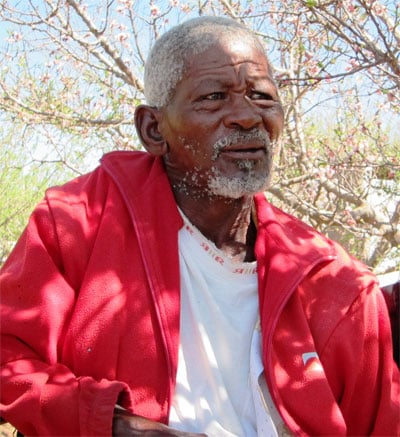 Oupa Dawid, one of the last speakers of Kora, in his orchard (2011) (Photo: Bradley van Sitters) 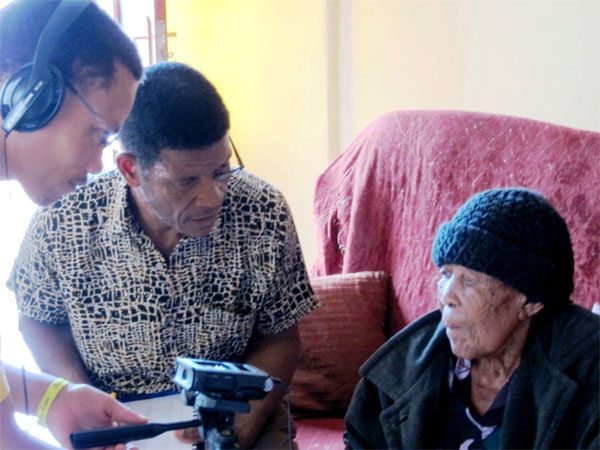 Given that only two short audio recordings had ever previously been made, it was a priority for us to record as much material as possible. We were limited, of course, by the speakers’ own failing memories, and we also found that neither of our two consultants was able to deliver any extended form of discourse. We were nevertheless able to obtain approximately 900 short sound files consisting of lexical items, short phrases and sentences.

What was the most surprising aspect about Kora / the Korana people / the Khoekhoe dialects that you learnt while researching your book?

I’m not sure there was anything completely unexpected, but it was certainly a thrill to hear certain features of the language that we had only previously read about – including the affricated uvular ejective (as in kx’anis, “bird”) which is known to have been characteristic particularly of the eastern dialects of Kora.

How did you go about your research? Did you do fieldwork, consult linguists, community leaders, etc?

The research itself was data-based and analytical. For the work on the phonetics, morphology and syntax, I drew partly on the data obtained in the course of our own fieldwork, and partly on the existing corpus of material previously gathered by linguists between 1879 and 1932. There were two early grammatical sketches already in existence, and naturally I consulted these short accounts as well. The final work represents a synthesis, and contains many new findings (for example, the existence of two previously unidentified verb extensions) in addition to all the new analysis.

One aspect of the work that proved to be an exhilarating challenge was the need to provide a framework-neutral account (in other words, a reference grammar) that would outlast fashionable theories and at the same time be reasonably accessible to readers who might not necessarily have a formal background in descriptive theoretical linguistics, but would be motivated enough to apply themselves. The ideal readers I had in mind were people very much like the extraordinarily committed and gifted members of the Korana community I met in Bloemfontein, several of whom were studying Nama.

It certainly was a privilege to meet Captain Johannes Kraalshoek, a direct descendant of Benjamin Kraalshoek, who worked with linguists in the 1930s. He very graciously entertained us in his own home, and gave the project his blessing. However, neither he nor any other of the present-day elders and representatives of the Korana people still speak the language.