In today’s knowledge- and information-driven society it is important for learners to be involved in active learning and concomitant teaching-learning strategies and methods at school level. Doing so will assist learners in developing 21st-century learning skills, such as problem-solving, critical thinking, communication, collaboration and self-directed learning (Dede 2010:52; Koh, Delanoy, Bene, Thomas, Danysk, Hone, Turner and Chapman 2019:18). It is important to point out that learners cannot develop these 21st-century learning skills unless serious efforts are made to teach these skills specifically. Therefore the teacher plays an important role in creating a learning environment within which 21st-century learning skills can be promoted. In this study, social constructivism, with a focus on the zone of proximal development, was used as the theoretical framework. According to the social constructivist learning theory, learning is an active process during which learners learn through interaction with other learners and the environment (Coupal 2004:590). The literature highlights the fact that case studies, as a problem-based learning strategy, can have a positive influence on the development of learners’ 21st-century learning skills (Loyens, Magda and Rikers 2008:414; Kek and Huijser 2017:31; Golightly 2018; Hussin, Harun and Shukor 2019:20; Mentz, De Beer and Bailey (reds.) 2019). This study aims to investigate the views of Grade 10 Life Sciences (LS) learners of the use of case studies in LS education.

In order to achieve the research objective of the study, a quantitative research design was used, and the study was conducted within a post-positivist paradigm (see De Vos, Strydom, Schulze and Patel 2012:7). In this quasi-experimental study (see Leedy and Ormrod 2001), two schools in the Tshwane South District in Gauteng were selected to participate in the research. Eight Grade 10 LS classes participated in the study – five classes with three LS teachers from the one school and three classes with three LS teachers from the other school. One of the researchers was an LS teacher at the school with five LS classes. For six weeks, case studies as a teaching-learning method were used in the different classes. Four case studies had been compiled about diseases of the blood circulation system, wetlands as freshwater biomes, human impact on the environment and ethical aspects of ecotourism. Furthermore, the learners received an assessment rubric with each case study activity to help them with the learning process, as for most of the learners this was their first encounter with case studies. After the case study intervention the learners completed a case study questionnaire developed by the researchers to determine their experience of case studies as a teaching-learning method. Statistical consulting services tested the case study questionnaire for validity and reliability by determining the Cronbach’s alpha values for the items in the instrument and the questionnaire, together with exploratory factor analysis. Descriptive statistics and effect sizes were calculated to determine the differences between the respective groups (classes) (Cohen, Manion and Morrison 2010:503).

In addition, the learners experienced their own role, as well as the role of the teachers, in the use of case studies as positive. The positive response of the learners can be attributed to the fact that each learner in the group had a specific role and each group member actively participated in the learning process. The support the learners provided to one another in their zone of proximal development during the learning process made a positive impression on them, as they had contributed to one another’s learning and the development of their self-directed learning abilities. It can, therefore, be assumed that some of the group members supported their fellow group members and acted as the “more capable peer” – an important principle of the zone of proximal development – where knowledge is socially created or constructed. With reference to the role of the teacher who acted as facilitator, most of the learners agreed that the teachers had supported and guided them in the use of case studies in completing the curriculum content. Most of the learners indicated that the teachers had encouraged them to take greater responsibility for their own learning in a group context. Thus it can be argued that the scaffolding that the teachers had implemented during the case study learning process contributed to the learners’ view that the teachers’ guidance had supported them in solving problems raised in the case studies.

In this study, although the learners had, in general, positive views of the use of case studies, there was a significant difference between the various experimental groups in the schools. At the school where one of the researchers was involved as a teacher, the views of the respective groups of learners were more positive in comparison with those of the groups at the other school. A possible reason for the differences may be that the teachers of the one school collaboratively planned, worked and deliberated on the effective use of the case studies and thus formed part of a community of practice where they could continually learn from one another. Through these joint discussions and dialogues among the teachers of that school about their experience in the use of case studies and how specific challenges could be solved, the teachers were exposed to open discussion and the sharing of new ideas and perspectives, which, in turn, could lead to better practices.

This study is significant for both LS teachers and LS learners because it provides guidelines on how teachers can use case studies in LS education, what the roles of the teachers and the learners are, and how case studies are assessed using rubrics. Moreover, the study is significant because it can inform LS teachers how to use case studies to integrate all three of the specific objectives as set out in the Curriculum and Assessment Policy Statement into a learning opportunity and, at the same time, also give attention to the emotional domain of teaching and learning. In addition, LS teachers can be made aware that there are various teaching-learning methods by which scientific phenomena can be investigated. 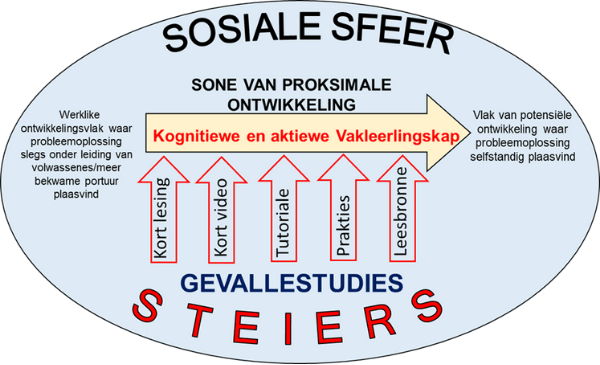 Chappell, A. 2006. Using the “grieving” process and learning journals to evaluate students’ responses to problem-based learning in an undergraduate geography curriculum. Journal of Geography in Higher Education, 30(7):15–31.

De Beer, J. (red.). 2019. The decolonization of the curriculum project: The affordances of indigenous knowledge for self-directed learning. Kaapstad: AOSIS.

Golightly, A. 2018. The influence of an integrated PBL format on geography students’ perceptions of their self-directedness in learning with the implementation of integrated problem-based learning. Journal of Geography in Higher Education, 42(3):460–78.

Heick, T. 2019. The difference between assessment of learning and assessment for learning. TeachThought. https://www.teachthought.com/pedagogy/the-difference-between-assessment-of-learning-and-assessment-for-learning (15 Junie 2020 geraadpleeg).

Lederman, N.G., J.S. Lederman en A. Antink. 2013. Nature of science and scientific inquiry as contexts for the learning of science and achievement of scientific literacy. International Journal of Education in Mathematics, Science and Technology, 1(3):138–47.

Scott, C.L. 2015. The futures of learning 1: Why must learning content and methods change in the 21st century? (ERF Working Papers Series, No. 13). Parys: Unesco Education Research and Foresight.

Williams, B. 2005. Case based learning – a review of the literature: Is there a scope for this educational paradigm in prehospital education? Emergency Medical Journal, 22(8):577–81.