Jessica Smith is a born-free and a lover of true-crime series. She participated in our Wesens competition. LitNet invited her to a pre-release viewing of Devilsdorp.

Devilsdorp is getting rave reviews in South Africa. How did you find it?

I thoroughly enjoyed the series. Mystery and suspense were cleverly maintained. It was put together so that the facts gradually became clear, fitting together like a puzzle, and there was always more to be revealed right up until the very end.

You own a T-shirt that reads, “Psychopaths (n.) People who watch scary movies for fun and sleep fine afterwards.” How do you rate Devilsdorp on the psychometer?

My personal psychometer is affected by how dark the suspect’s or suspects’ actions and motives are. By the end of episode one I might have given Devilsdorp a five out of ten, because the crimes seemed to have clear and unsurprising motives. Killing for money is something that the average person can fathom. What made Devilsdorp truly horrific was discovering how devious the schemes were, how many people were involved under one mastermind, and how utterly convinced they were that they had every right to take human lives. Marinda Steyn’s remorseless testimony is, without doubt, one of the most disturbing personal accounts I’ve heard from a killer. I felt physically ill and I had to take a moment before finishing the series. I would give Devilsdorp a ten out of ten on the psychometer. 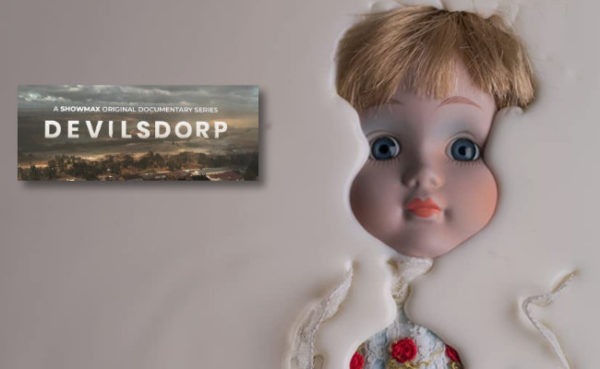 The setting of Devilsdorp is Krugersdorp. The name of the series has to do with Cecilia Steyn’s claim that she is a witch, but it also sheds light on the bizarre world of the police’s so-called occult crimes unit. How did you find this investigation?

An occult crimes unit seemed odd from the start, because occult-related crimes are very rare. Even if they were common, Satan worshippers do not necessarily leave different kinds of evidence from that of ye olde murderer. One still has to search for fingerprints, DNA evidence, the weapon, and so on. It’s not something like a fire investigation, in which you need specialised training to look at the scene and find clues that the average detective would struggle to spot. In this case I commend the prosecutor and the detectives who worked day and night, in sickness and in health, to solve this case and deliver justice, but I am appalled that the mysterious Colonel was not removed from the case the moment his unscrupulous relationship with the suspects was hinted at. Disappearing dockets, unapproved wiretapping and infiltration – these are signs of a seriously flawed system that could easily do much more harm than good. It is fortunate that this case did not end with more deaths. I wonder how many other members of the occult crimes unit were there because they had an unhealthy fascination with the very thing they were supposed to stop.

My generation was taught that the devil is everywhere. Books were burned, dolls were burned, all in a way to cleanse any house of evil. You, however, grew up in an ecumenical church environment. Did the devil play such a powerful role in the Anglican school and church that you attended?

No. The devil was rarely mentioned at my school, my church, or in my home. My father was the reverend and I think he has always been repelled by the idea of making a congregation fearful rather than building them up to be brave. My family has had a few weird experiences: footsteps in the house when nobody was walking about, cold spots, candles extinguishing themselves with no breeze, but they’ve always stopped after the standard house blessing with oil on the doorways. No burning of items or desperate purges required. My mom would have been furious if our Harry Potter books had been burned. She paid good money for them.

I loved listening to the two psychologists, FH Havinga and Louis Awerbuck. What did you think of their inclusion in the series?

Having the psychologists present was very important, because they provided an expert understanding of the anti-social behaviour that we as viewers were witnessing. There will always be questions, but if there is at least some explanation for how supposedly God-fearing people could become cold-blooded killers, then people should have that explanation. Although I’m no expert myself, I would theorise that just as we project in order to protect the ego, we hold evil as a force that exists outside of us in order to protect ourselves. It is difficult to grapple with the fact that evil is much more often directed through beings of flesh and bone rather than through demonic entities, because if you accept that the people you meet on the street, people you work with, people you love can do evil things, you must accept that you can do evil deeds too. The psychologists help us to remember that.

A lot of Afrikaans is used in the series. Did it bother you?

I found the photography extremely good and the fast-paced editing meant that we never grew bored. Your take?

I agree that the photography was wonderful. I was so engrossed that I barely thought about the editing. It all flowed together perfectly. Only the occasional flash of a crime scene photo was jarring – as it was meant to be. The cinematography and editing really set the right mood and atmosphere without being overly sensational or dramatic.

Would you recommend the series to friends?

I would definitely recommend Devilsdorp to friends who are interested in the true-crime genre. It was superbly put together. I must add a word of caution though: It is not for the faint of heart.